When we start out on the guitar, we start with simple open chords, that are played close to the head of the guitar. Chords such as the C, G, D, Em that we all know.

However, very quickly you'll notice that guitar players also often play chords “higher up the neck”, and in many of them – the index finger is used as a “barre” (where it presses down multiple strings at once). 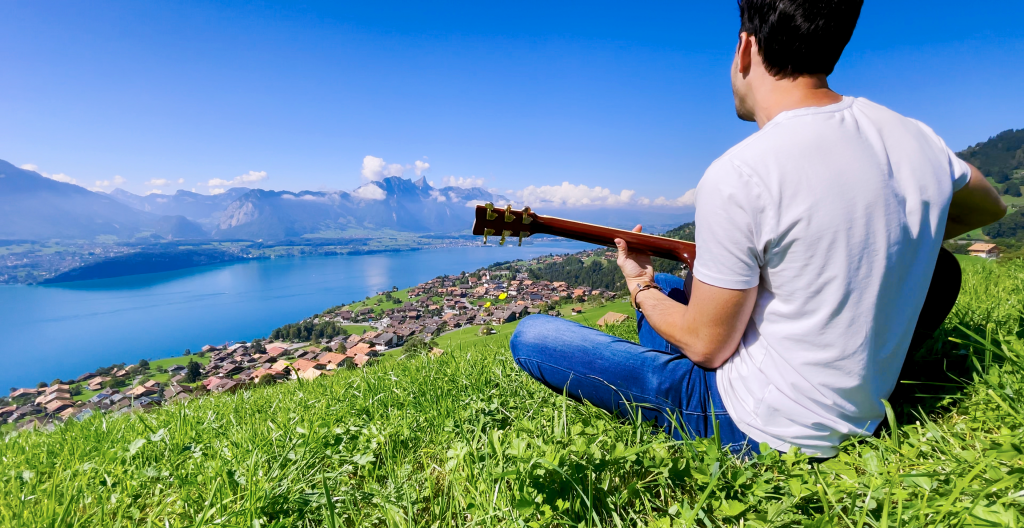 Barre chords up the neck are a big part of almost every guitarist's repertoire – as spotted here from the back… (This is from a recent trip to Switzerland – never played in front of a nicer view!)

Barre chords are often the first main challenge that guitar players encounter – and many quit playing the guitar at the notorious “F barrier” – where the student gives up when approaching the F chord – which is usually the first barre chord that people learn.

First of all, I want to give you a couple of benefits of barre chords – so you can understand the reasoning behind why we even play them:

What do barre chords give us? Why not just play simple open chords forever?

1 – Barre chords give you many more options to play the same chord. For example, you can play the E chord not just in the simple open shape that you've learned in the first days, but also in all of these “voicings”:

E chord with a barre on the 4th fret, while the other fingers are holding down a shape of a C chord… (This is basically creating a “C” chord, but your barre allowed you to “move” it up from E to C, 4 semitones by taking it 4 frets up. 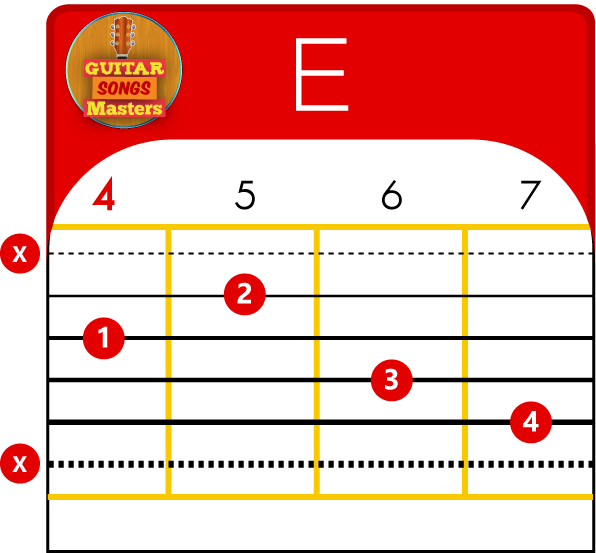 This is also an E chord with a barre on the 7th fret, while the other fingers are forming the shape of an open A chord… 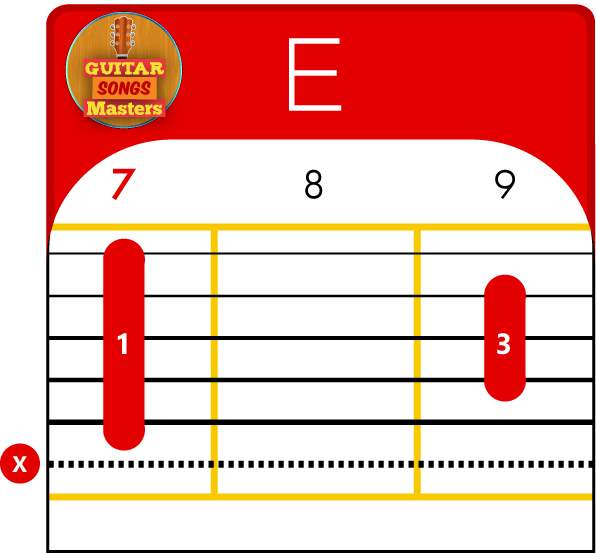 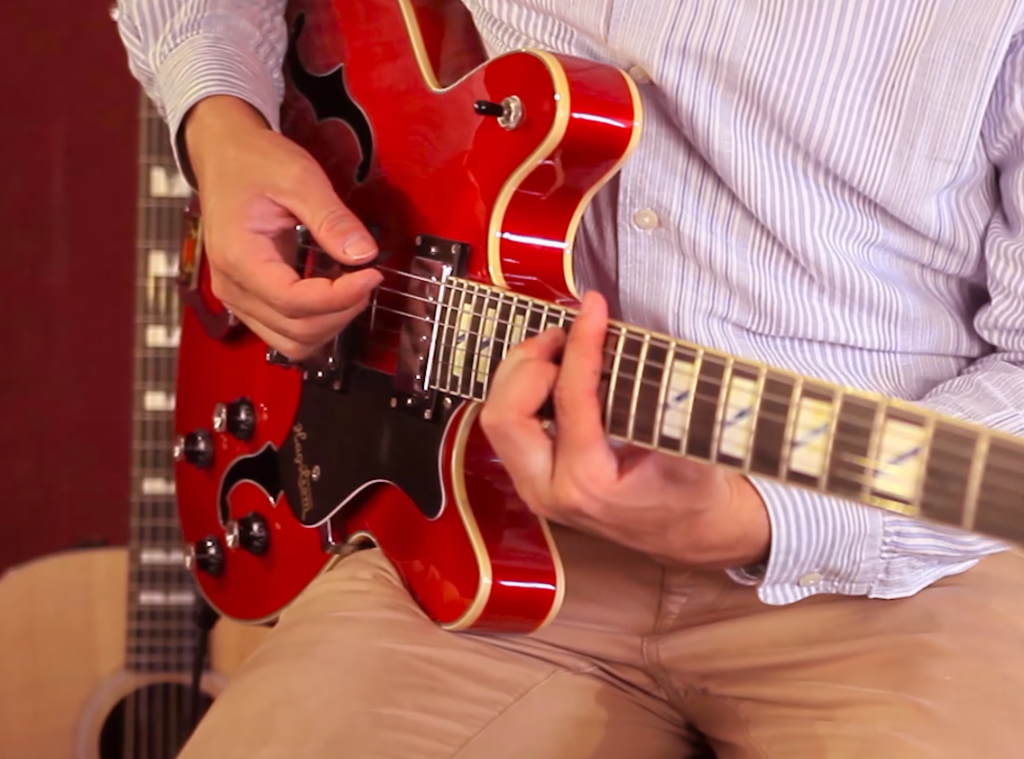 This is the same E chord shape you know from playing an open chord, but by placing the barre on the 12th fret – the octave mark, we get an E chord which is exactly an octave above the regular E chord.

And what do these different voicings help us? Well, each one of them has a different sound, a different “flavor” that you can use to spice up your sound instead of always playing the regular open E.

So it simply helps you widen up your palette of choices, instead of always playing the same chords in the same way and having all of your songs sound very much the same.

If you like writing songs, (or even just experimenting with this idea) I find that barre chords are also a great way to start adding new sounds to your repertoire, sounds that can invite a lot of new inspirations and new songs.

2 – Many chords are pretty much only playable with a barre. Some common examples: C#m, G#, F#, Eb, etc. (Unlike the F chord which can also be played in different “shortcut” ways that do not involve the barre.

So if you want to be able to play songs with these other chords – you gotta have the ability to play barre chords. 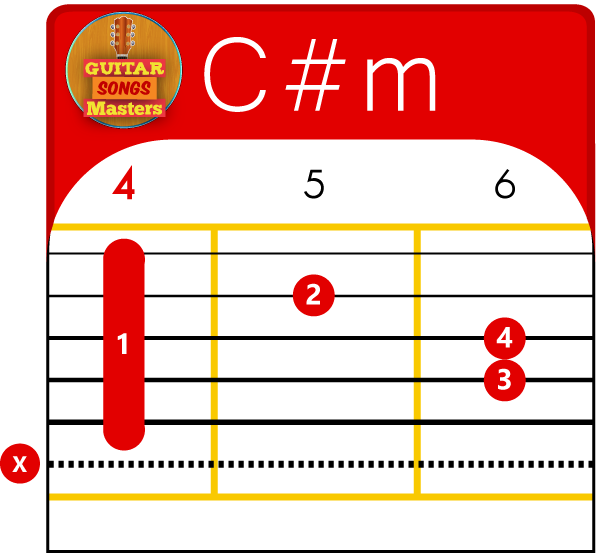 C#m – a relatively common (and beautiful) chord which can pretty much only be played with a barre.

3 – Barre chords let you add certain techniques that give your playing a more percussive sound. For example, Jack Johnson is an artist who's often playing using the technique where he plays the barre chords but on each beat, he slightly lifts up his fingers, which gives a short “mute” – that can add a lot to the rhythm of the song.

Jack Johnson often uses a specific technique to add rhythm to the strumming – where you slightly lift your fingers off of the barre chord in order to create a rhythmic mute. You can hear this in the song “Flake“, for example. 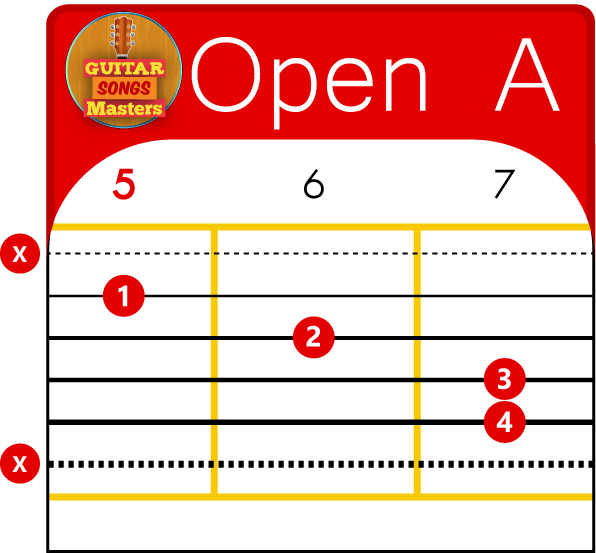 7 Tips to Play Barre Chords in a Clean Way

With these benefits above in mind – you probably already know that barre chords are going to be an essential part of your guitar journeys.

So even if they are hard to play cleanly in the beginning, these next 7 tips will help you conquer them, starting from the F, and into any other barre chord that you'll encounter.

All you need is just a little bit of practice each day, and before you know it – they will be very easy for you to play.

1 – Your index finger (“the barre”) should be positioned very close to the metal fret, but NOT on it

This is a common mistake at the beginning – where people either put the index finger right in the middle between the two frets, or directly on the fret. Instead, place it very close to it, but not on it. 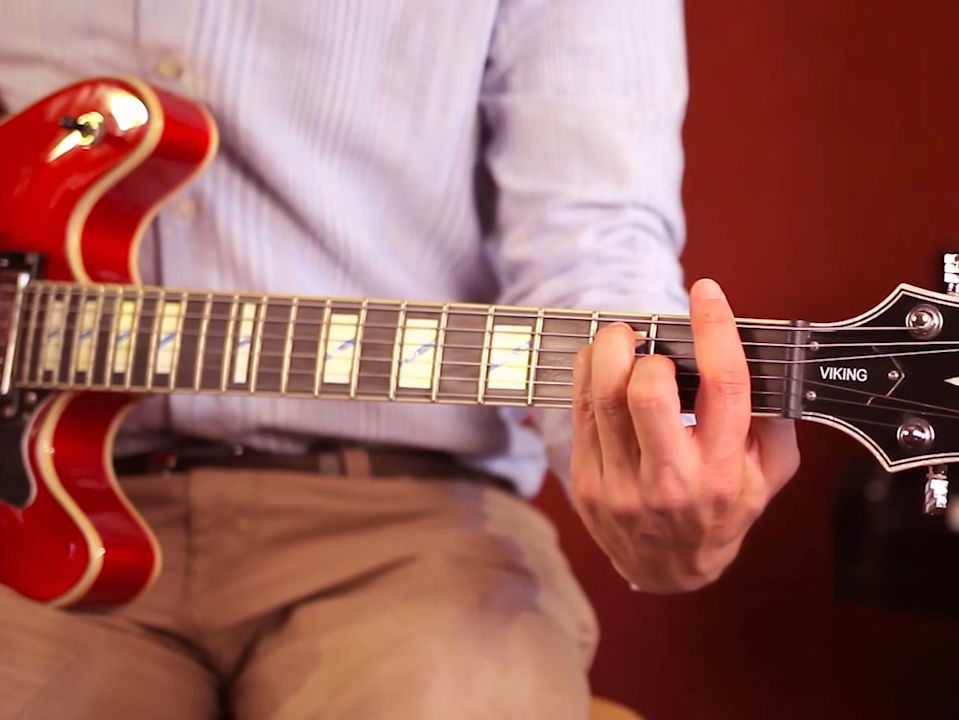 Place your barre finger right next to the metal fret, but not on it.

Usually, when playing open chords, our thumb would rest at the top of the neck. But you'll see that the natural position of the thumb changes when playing a barre chord – and that is something that you can use to your advantage.

Why? Because doing so will reduce the pressure that you'll need to apply with your index finger, as it will “complete” the hold from the other side. The result? It will be easier to get a clean sound on all of the strings – since your barre would be pressed more evenly.

This is where our finger would often “want” to rest when we play open chords, but with barre chords, there's a better resting spot for it… (See the photo below) 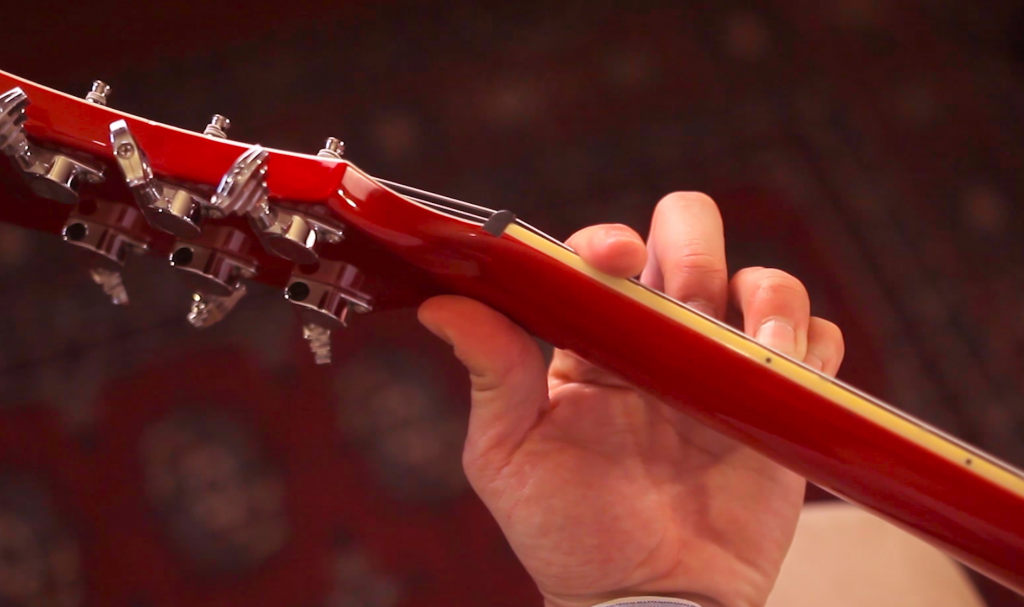 Adding a slight pressure from the back of the neck with the thumb will mean you are “distributing” the pressure needed to play cleanly, and you won't have to press very hard on the front side.

Yes, you do need to apply some pressure with your index finger on the strings in order to get a clean sound, and as stated in #2, you should use your thumb to “spread out” the pressure evenly and reduce the amount of pressure needed from either side.

However, something very important is to make sure that you do not apply too much pressure. That would just cause you to get tired very quickly.

When playing open chords, the wrist is usually held directly straight behind the neck. With barre chords, you would find that you would naturally want to slightly bend it.

A common mistake is to “resist” that bend, instead of allowing it, and finding your most comfortable way of using it.

With regular chords, our wrist will be straightened, and that would feel very natural.

With barre chords – your wrist will “want” to slightly twist down. Make sure you “let it” twist down easily and without also moving the elbow, the elbow can stay in its place, and you can simply adjust the wrist to a position that feels more comfortable. Remember that comfort is the key word, if it's not comfortable – check your barre chords again compared to all the previously mentioned points.

You'll notice that if you slightly angle your index finger, it will be easier to get a good press over all of the six strings, and with more ease. 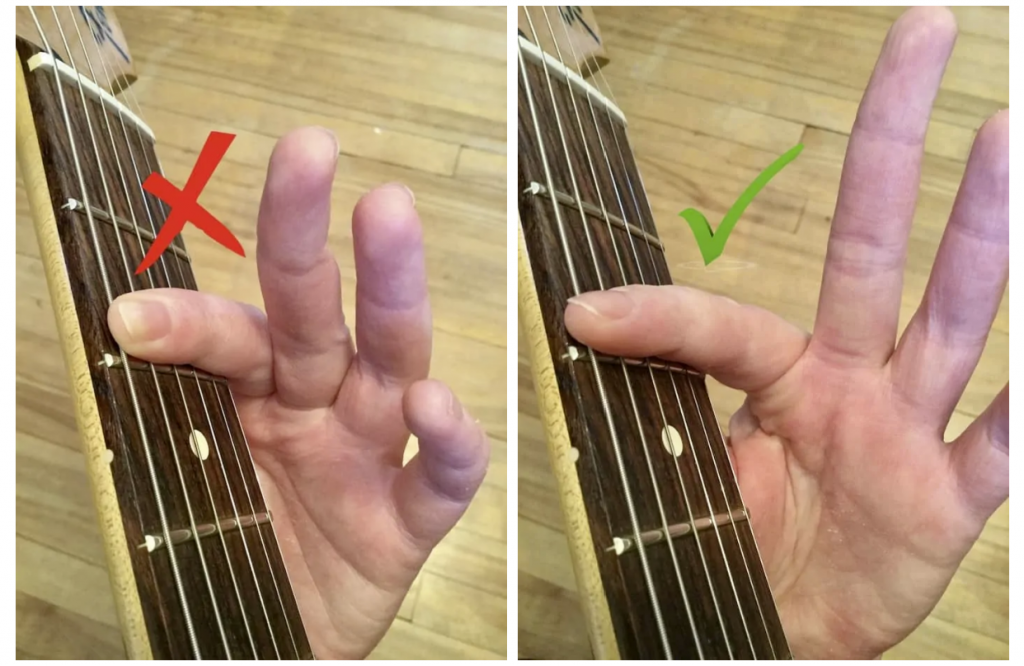 This one is something that I believe is true regarding any new chord that you'll learn how to play.

If the chord does not sound very clean – you are probably muting one of the strings by not pressing it down correctly. This might cause a mute or a “buzzing” string.

The solution is to simply test the strings one by one, and if something needs adjustment – make sure you are doing that. For example – it might be that your finger is on the metal fret instead of next to it (as mentioned earlier) – so make sure that all throughout the six strings – your finger is not on the fret.

7 – My secret trick – use “The Chord Reset” exercise

The chord reset is my favorite exercise when it comes to ingraining a new chord shape into your muscle memory, and I still use it to this day with advanced chords that I learn.

The idea is simple – you press down the chord, strum it / pick it once to make sure all the strings are ringing, and then open your hand and place it on your lap. One “rep” like this would probably take anywhere between 1-3 seconds.

Do this for 20-30 times in a row with one specific chord that you're working on, (for example, the F chord) and gradually try to do it without even looking at your fingers.

This would ingrain the specific chord deep into your muscle memory, and if you repeat this over a couple of days for 1-2 minutes every day – you would find that you just “know” the chord, and you can probably play it with a LOT more ease than a few days ago, cleanly, and without even having to look at your hands.

The “Chord Reset” trick step 1 – press down the chord and strum all the strings to make sure they are all ringing nicely.

Step 2 – rest your hand on your lap. Then – repeat. (Read above for how and why it's such a game changing exercise – and also very easy and quick to do)

Barre Chords with the Root on the 6th String 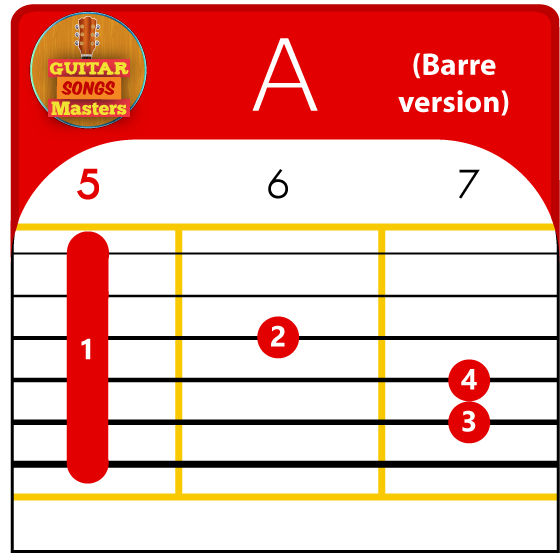 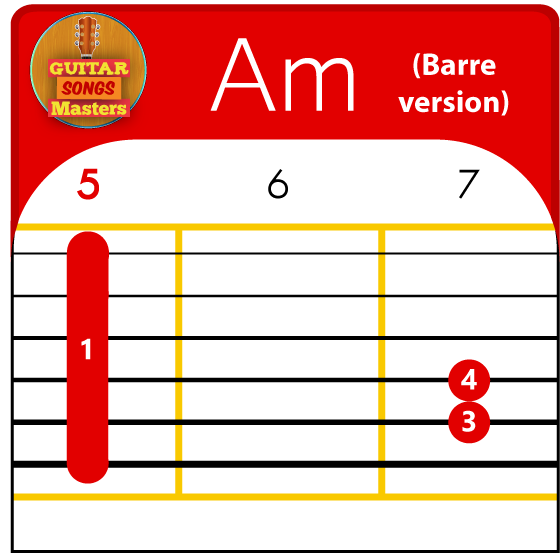 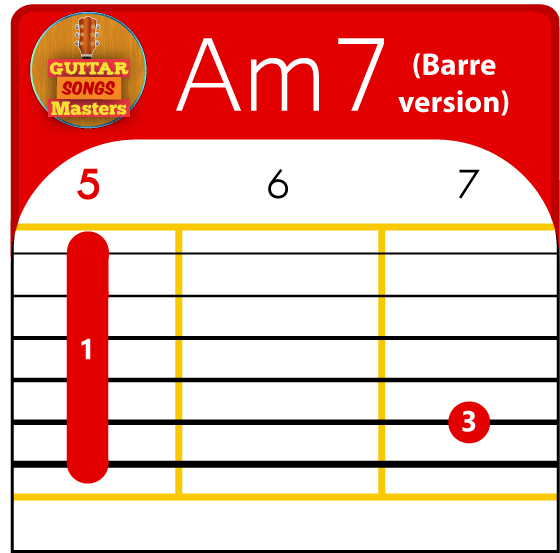 All of these chords are movable based on the chart below:

So for example to play a G barre chord, take the shape of the A barre chord and move it down two frets so that your index finger is barring the 3rd fret instead of the 5th fret.

Barre Chords with the Root on the 5th String 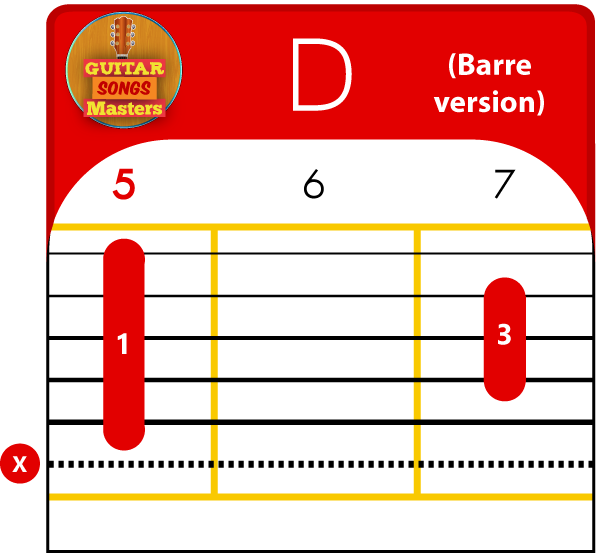 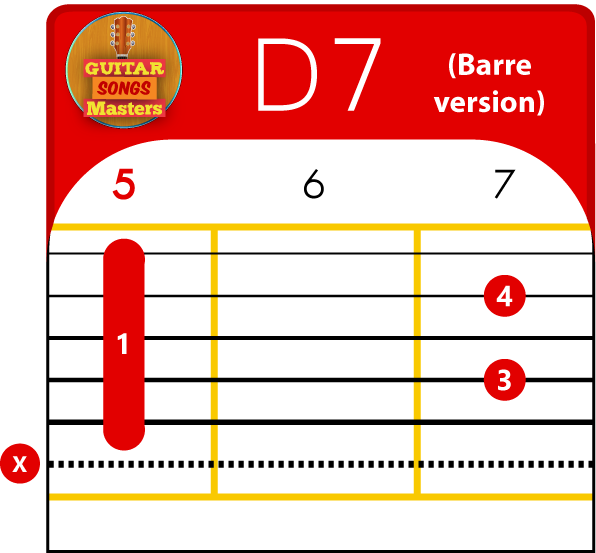 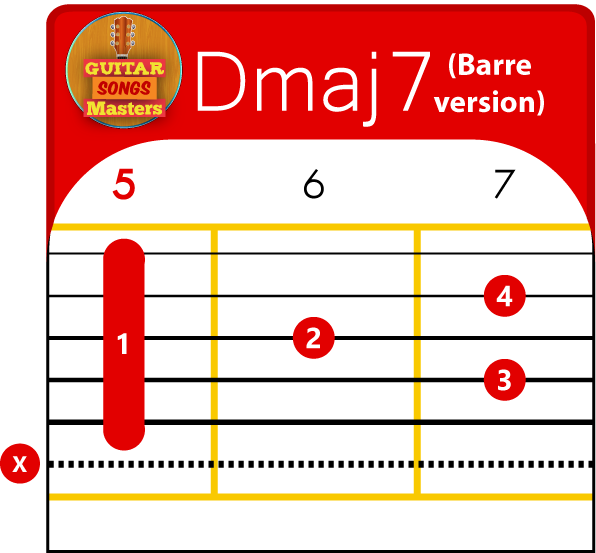 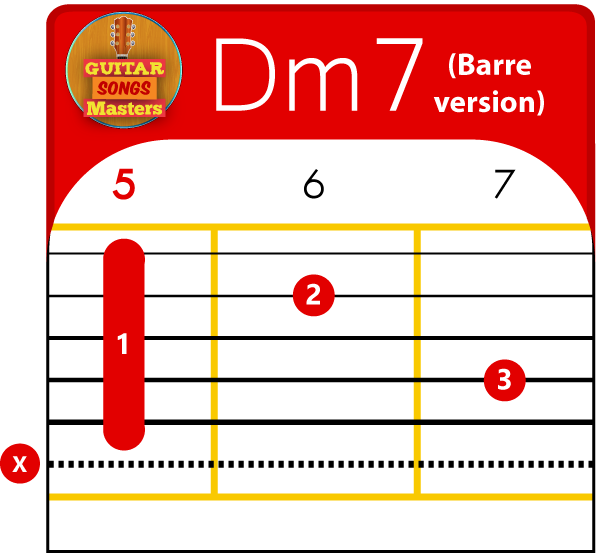 All of these chords are also movable based on the chart below:

For example, to play a C7 chord, take the D7 chord above, and move it two frets down so that your index finger is barring the 3rd fret instead of the 5th.

I made a 25 pages beautiful E-Book for you which can immensely serve you throughout your guitar journeys.

It is filled with practical explanations, diagrams and photographs of many different guitar chords types:

You can get it in this link.

Click here to get the 25 pages guitar chords cheat book with all the chords you'll need for the first few years of your guitar journeys. 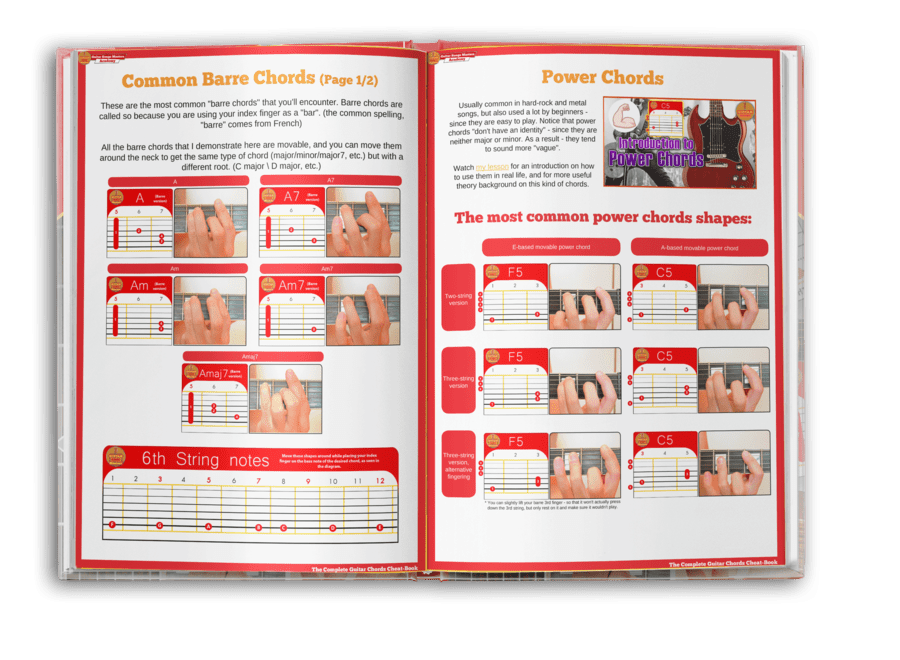 Everything from your first chords, to barre chords, to jazzy and bluesy chords, “thumb-over” chords, power chords, etc.