Last month we had an introduction into the world of singing harmony, we had a look on how to do it and we also saw some notable songs and artists who use harmony in their songs. Today I will be more

The Mamas And The Papas

specific by showing you my list of top 13 performances that included harmony and backing vocals in them –  the 13 best harmony songs.

The criteria I used when picking up the songs was not purely the harmonies and how good they are but also how big the song eventually got, which is something that obviously all the great harmonies that are featured here take a big part in. These are the top 13 but they are listed in no particular order.

When you listen, open up your ears and try to spot the different kinds of harmonies that we talked about in the “Singing Harmony 101“. For further explanations, click the link.

There's so much you can learn from this list. Listen closely and then go out and try it yourself the next time you're jammin' with friends. 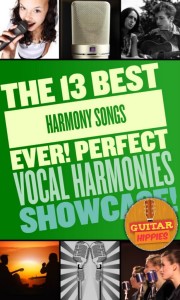 The huge 1965 hit that we cannot even imagine without those Echo & Response harmonies that made it so big. By the way – there is an awesome cover by Shaw Blades that turns up the electric guitars instead of the flute… You might like it if you like the original.

These two classics by The Beatles feature perfect backing vocals – the “Oooo” “Ahhhh” type… Not a surprise that Michelle won the Grammy award for song of the year in 1967.

On Californication one of the coolest parts are coming at the pre-chorus at 2:29. Check it out.

On Otherside you can hear a great example at 3:30 of how you backup and intensify the most edgy part of the song.

The Yardbirds (used to be Eric Clapton's band) show us a few different ways to implement harmony and backing vocals in this 1960's gem.

Hopping back to the 90's with the sweet song, this is more for the girls between us – a gorgeous example of how to “shadow” a voice without overtaking it – the female way. 2-3 more female singers are harmonizing Loeb's voice here. Most of the good stuff starts at the second verse at about 1:05.

Lisa Loeb - Stay (I Missed You)

3 Male voices with perfectly executed Chordal harmonies. Like traveling back in time to Woodstock with this masterpiece.

This 2006 remake features Mary J. Blige – an unbelievably amazing vocalist. During the first verse she is doing backing vocals in an almost gospel style, and then she's going in for the lead and getting all the dust off of the 1991 hit, especially in the last part of the song. Beautifully done.

Simon & Garfunkel made a whole beautiful career on harmonies and this is perhaps their most recognizable song. The rely mostly on Chordal harmonies where Paul Simon is singing the lower part and Art Garfunkel takes the higher pitched parts.

Beautiful “Ooooo's” during the verse and then great Chordal harmonies in the chorus, sung by multiple singers.

This recent hit by this awesome little band is so catchy, and a lot of it is thanks to the multiple harmonies sung all throughout the song. The last chorus also shows some very nice Echo & Response kind of harmonies. Give it a listen if you don't know it and get ready to keep hummin' it all day tomorrow…

Below is a very cool live version performed inside a van, but the album version sounds even better – check it out here.

The Beach Boys were the champions of harmonies, even in the 60's where as you can see above – everybody was doing it, and doing it very well (to say the least).

Beach Boys- I get Around

Other Notable Harmony Songs to Check Out:

The Eagles – Hotel California: Really, almost all songs by the Eagles have some amazing harmonies (and guitars!)

Ben Harper & Jack Johnson  – High Tide Or Low Tide (Bob Marley cover): In this unique and beautiful cover you can see both artists give great harmonies to each other. And also a slide guitar… A joy to watch and to listen to.

Rockapella – Sweet Home Alabama: Choirs are all about the harmonies and this Acapella cover of Sweet Home Alabama gives us a totally different angle on the song. “Rockapella” also has other interesting renditions of classics that you will be surprised to hear: Basket Case, Stand By Me.

Grateful Dead – Sugar Magnolia: Generally speaking, almost all of the Grateful Dead songs feature great harmonies. Also watch out for Truckin' and Uncle John's Band – these are truly some of the best harmony songs out there.

That's it, have fun and enjoy the music.

What other songs would YOU consider to be the best harmony songs out there? Please let us know in the comments!

I hope this list has given you some ideas, and if you want to have another bunch of awesome songs in a fancy PDF form (many of them also appear on the list above), feel free to download the songbook in this link.

You” find more details about the songbook underneath the two pictures (and don't worry, there's a lot more to it than Wonderwall and Hallelujah, you'd be delighted)\ 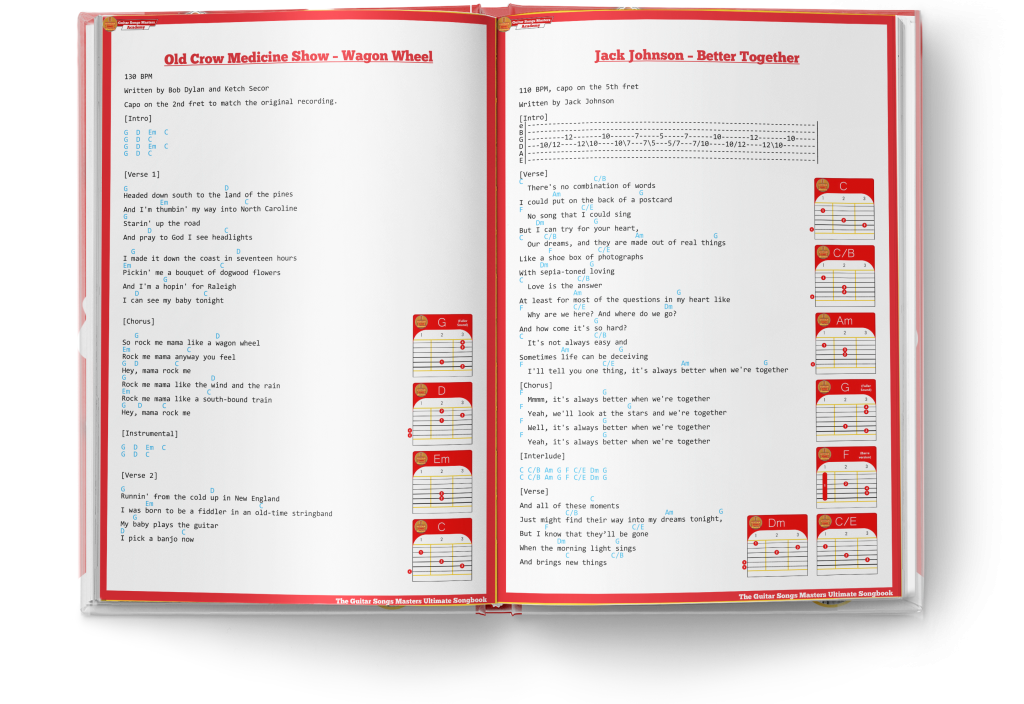