So as some of you might have read already about my summer in an Austin Texas summer camp where I worked as a musical director and guitar song leader. I always loved being around kids, but now I also received the experience of how to use the guitar—and sometimes the ukulele—to put a smile on children's faces, and I am happy to share it with anyone who's interested! Below are some of the fun songs that I used during that summer and I found out that kids enjoyed the most. Enjoy! 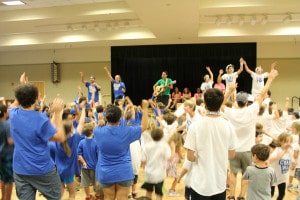 That's how it looks like when you really hit it with a good song for kids – everybody's on fire. This is me at a summer camp in Austin TX where I worked as a musical director. Read some great song-leading tips here

Click on the name of the guitar song to be linked to the Ultimate Guitar chord sheets page.

Just be careful not to fumble your tongue with the quick lyrics, but kids love it! Teach them the lyrics and challenge them to sing it fast enough like the original. It's also very fun to play on the guitar and with the ukulele too.

Bastille's Pompeii is a popular song to play with kids around. This pop song has a catchy beat. You can also teach the kids the “Eh-eh-oh, eh-oh” part of the song so they can sing along. In my experience, kids love that part.

Kids just love the “sha-la-la” part, and I just find the harmonic chord progression here very pleasurable, which is what probably makes this song so likable besides the sweet lyrics. Especially liked by brown-eyed girls…

This beautiful Disney song reminds people of Toy Story and immediately puts a smile on their faces… Love it! This is also an easy song to learn so kids love singing this.

Check out this beautiful cover here by OrtoPilot that will show you a great way you can play it on the guitar.

Also, here's a gorgeous piano version played live by Randy Newman at a Jazz festival in Germany in 2006.

You've Got A Friend In Me - Randy Newman (Toy Story Edition)

If you know and love to whistle while playing a guitar song or accompany any song with a whistle, then you should definitely have to play Booby McFerrin's Don't Worry Be Happy song with the kids. This one is also a great song and a great example of fine whistling, so try to teach the kids to whistle this solo! If you have kids in the group that knows how to whistle, let them whistle while you play and sing the song.

No matter in which state you are in, people just love to sing along to an easy song just like Lynyrd Skynyrd's Sweet Home Alabama.

This song is kinda silly and I can't say that this is my favorite on the list – but the kids will keep asking for this popular song. So make sure to include this song in your repertoire when you sing with the kids.

This one I found to be a big favorite amongst early teens, like 9-13-year-olds. This is not an easy song as strumming pattern is a bit tricky and involves a lot of muting so listen to the original to figure it out and practice, practice, practice. Once you get it under control, it is entertaining to play this great song!

I play Ben King's Stand By Me, especially when everybody is in a super-friendly mood.

And check out this awesome Rolling Stone article: 20 Best Covers Of “Stand By Me”!

Apparently, among those who covered this hit are John Lennon, Muhammad Ali (yes!), Otis Redding, U2, and even the popular Disney icons: Timon & Pumba, and others.

An American classic. When you start playing the song‘s guitar chord, the kids usually yell “hey! My mom sings that to me every night when I go to bed”… And adults like it too just as much! I love playing this song with my acoustic guitar. If you have both kids and adults in the group, I usually play this song.

You Are My Sunshine .. Original Song...

If you love Disney songs, then a Lion King song should be part of your playlist, especially with kids around. A Disney song close to my heart is Can You Feel The Love Tonight. This is good music to the ears of both kids and even to the adults who have seen The Lion King in their younger years. It brings back happy memories indeed.

Can you feel the love tonight - Elton John (Lyrics)

Bring out your acoustic guitar and let's play Hey Ya. Don't forget to clap at the beginning! (-:

I like to play it as a mix between the original version and this modern version by Hermes House Band. This is a simple song for your acoustic guitar.

Kids go crazy with The Cups Song. Teach them how to actually play it with cups and the boys and girls will be happy and keep bragging about it for 2 weeks straight! Before you introduce this song to the kids, spend some time practicing the song‘s clap and cup segment so the kids can participate. This can also be an instant bonding session with the group.

This is a superb cover of it by 4 very talented young people!

I think this is a popular song in my generation but kids love it and can still jam with the beat. This is a great way to introduce not-so-modern music to younger generations. Smashmouth's Allstar is one of the easy pop songs to learn and play with the guitar. Trust me, you won't regret it if you know how to sing and play this song.

Another one for the friendly times! “Playing For Change” recently did a BEAUTIFUL cover of it that ranges over about 15 countries. If you don't know them and what they're about – check it out right here, and you're also welcome to check out: Top 7 “Playing For Change” Epic Street Covers From Around The World.

Hey Soul Sister is a fun song to sing and dance along to! Voice-wise, it can be very challenging to sing like the original. When it's on the key of C, notice the capo on 4, and some of you may have to put it even higher. For my voice it somehow felt best with the capo on 8, so feel free to play around.

3  – Bob Marley – One Love, and all the rest of his more upbeat songs!

Are you a Bob Marley fan? Then you should not forget One Love in your repertoire. A lot of Bob Marley songs just seem like they were naturally written for kids when you come to think of it. So take advantage and make the children happy with his great repertoire! This is also a great way to introduce this music to the young audience.

Speaking of a younger audience, you might want to include songs from modern artists in your repertoire. Here comes Taylor Swift to the rescue. It might feel a bit silly to play and sing, but give it a chance! I fell for it too and I am certainly not a Taylor Swift fan. AND can't argue with the fact that it's a smashing hit and will probably continue to be loved among youngsters.

Make sure to not show them the video which is not really appropriate for kids.

By the way – check out this bluesy and soulful cover of Shake It Off by an extremely talented guitar player.

Taylor Swift - Shake It Off

Another popular song is from Katy Perry. Yes, you might not like Katy Perry, but she's probably the number one music star among kids in America. If you want to create a real dynamite effect with children – mash up these two hits by her, they are both in the key of G so it sounds natural. The end of the chorus is a good mashup point. Be sure there is enough space for them in the room to dance and go crazy in…

This is one of my favorite classic songs. It's a simple song, with simple chords, and a great song for kids and adults alike. This is also a fun and great way to teach music to kids, especially those who are not musically inclined or are not familiar with Do-Re-Mi. This is also a perfect way to expose the kids to the treasures of classic music.

I think Brave by Sara Bareilles is one of my favorite songs that the kids will love. This is one of the easy pop songs with simple chords you can learn to play with your guitar. Although I'm really not an avid Sara fan, I believe the kids will appreciate it if you add her songs to your repertoire.

Most of the time, any other current top 40 hits (which is kids-appropriate) can also be a great idea since the kids will mostly know these songs.

I really like how the list turned out to have songs from as early as 60 years ago. (Stand By Me) Kids can appreciate good songs too and not just MTV hits, so give them a try, and have fun! If you are willing, your acoustic guitar or the ukulele is a very powerful tool that will let you spread love and smiles, and bring happiness to other lives as well as yours.

Whatever song you play with the kids, it's important to have fun and as much as possible include them in the singing. Teach them the lyrics for them to sing along, provide props like cups, let them clap or tap to the beat, or let them play their musical instruments with you. And if you have the time, you can also teach them to play the guitar or the ukulele. 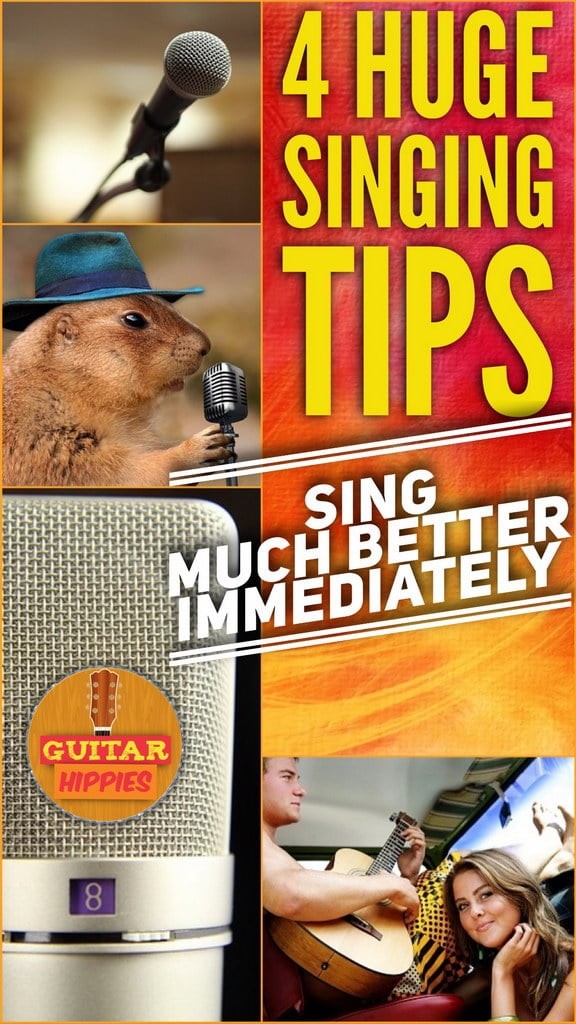 If you'll be comfortable with your singing – you will have a much better time and the kids are more likely to join the vibes and sing as well. Here are a couple of very effective singing tips:

2 comments for “Top 20 – The Best Songs For Kids That You Can Play On The Guitar To Make Kids Happy!”