Post Views: 2,948
(Last Updated On: September 1, 2019)
7 Life-Lessons I Learned While Busking in Australia and Europe

Here are a few lessons I collected on my last journey that I believe can be valuable to any musician – enjoy!

At the beginning of the summer, after spending a few months in Melbourne, Australia, I was about to leave and head to the legendary town of Byron Bay for a one-month adventure.

I just broke up with a girlfriend of one year, and as I was going through this new phase and making new life plans, I felt adventurous, and I knew that I could (and should) do crazy things that I haven’t done before.

One of the ideas that came to me was that when I go to Byron Bay, which is very famous for all the good music and musicians that hang there and started there, I want to buy a busking amp and just PUT MYSELF OUT THERE and see what happens. 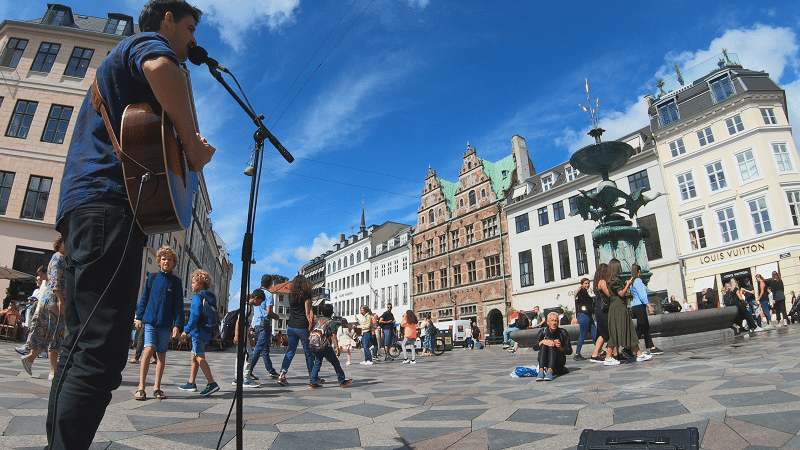 In one of Copenhagen's (Denmark) main squares

It seemed a bit odd to me, because back home in Israel – it’s often homeless people who are playing on the street – and it was honestly very negatively associated in my mind. But I decided to “push through” and go with my intuition, despite my snobbish feeling that I should only play in venues.

I felt like I have what it takes to play outside and give people some good times, and I thought that it can be a great way to meet new people and enjoy new experiences.

So that week I went out, bought a busking amp and a looper, and got on the plane to Byron Bay, with the official song of my 2019 summer in my mind: “Follow, follow the sun… Which way the wind blows… When this day is done”.

I just followed my sun. I did not know what’s gonna happen, but I knew it’s gonna be a fun ride. 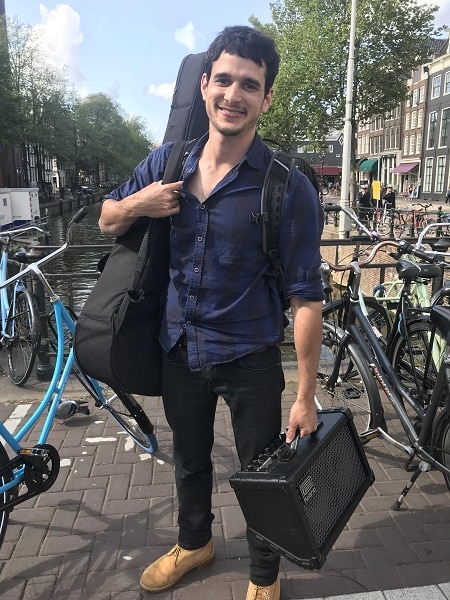 On the way back from a session in Amsterdam

This July in Byron ended up as perhaps the most social and experience-filled month of my entire life, so I decided to go to northern Europe and keep up with the almost-daily busking for several more weeks before heading back home. (In Europe I also played some venues as well)

So here are 7 things that I have learned over this summer of playing music to people, that I believe every musician can learn a lot from! Enjoy:

1 – Put yourself out there and see what happens – that’s my new life motto.

This is the #1 thing that I have learned. You never know what’s gonna happen when you “put yourself out there”.

“Out there” can mean – doing street performances, uploading videos of your playing to your social media, pitching a one hour music performance to your local bars, etc.

You can apply it in many different ways, but the bottom line is just make the first steps of “putting yourself out there”, and trust that your gut will tell you what the next ones should be.

Don’t be afraid to appear as a beginner or a newb, because everyone who you think of as “good at what he does” was once a newb as well – but he pushed through that phase. This embarrassment is what’s keeping 90% of the people deep in their comfort zones, and without major progress. 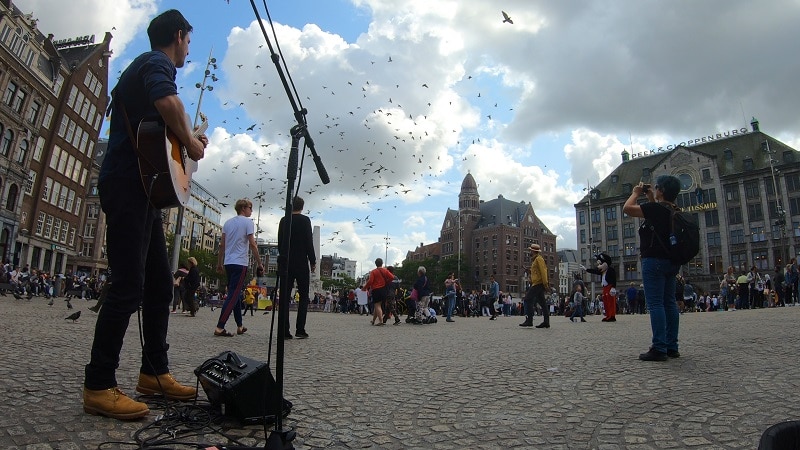 Amsterdam! (Look at all these birds)

When you put yourself out there with people and play for 2-3 hours at a time, you can never predict what will happen, how will it go, and what will the day bring.

Some days will be just “alright”.

Some days – you’ll kill it! It will seem that people will LOVE you, you’ll get heartfelt compliments, two people will join for an awesome performance with their guitars, and you will get an offer to come and play at the local bar for 150$.

And other days – you’ll feel down, like the whole world is ignoring your music, and “why am I even bothering with this”.

It’s all ok. Just keep going and learn the lessons from whatever comes your way – because tomorrow’s a new day.

3 – LOOSEN UP! Just Smile and Laugh! The world is funny!

I believe that this one is always relevant, but when you have “the spotlight” on you – it’s even truer:

People love people who smile and have a good time – and even if it’s a bit hard to remember that while you’re so focused on putting on a tight show – smiling is the #1 key for having more of those “great days” and less of the bad.

A specific person that always smiles when he plays is the Australian fingerstyle master Tommy Emmanuel.

So if you need a good role model – just check out a few of his videos, and you’ll see how fun it is to watch a joyous performer who takes it easy. 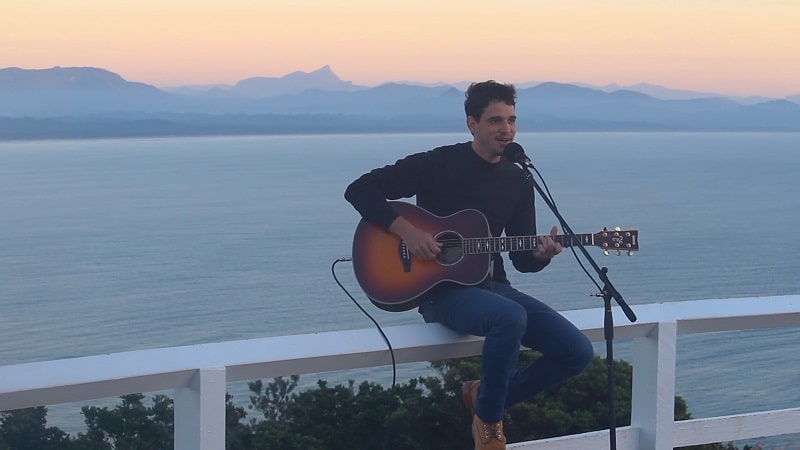 The Byron Bay Lighthouse – and the gorgeous mountatin range behind me on sunrise. The full video of this song is here: “Song of Australia / Waltzing Matilda”

4 – One of my favorite things about playing outside was the people-watching.

Seeing the stream of so many different people pass by while I was playing was a constant source of entertainment for me. (And I mean that in the good, people-loving way)

The surfers and the chill people coming to see the sunset at the beach and smoke their joints in Byron Bay, opposed to the super-tall blonde people who hurried throughout their days in Copenhagen, Oslo and Amsterdam.

That’s all part of the beauty of this world that’s up for us to enjoy. So take it all in while you can – whichever city you happen to be in! 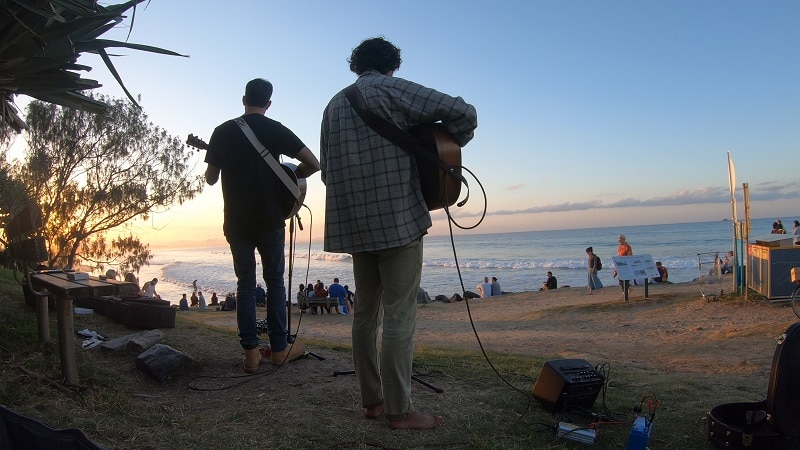 Always be open to spontaneous collaborations.

I spent the most time in Copenhagen and Byron Bay, so in both of them I got to taste a bit from the local busking scenes and got to know some cool people who were also busking around.

I ended up, by coincidence, playing improvised shows with several of these people along the way. These shows were fun jams – where after each song we made a decision on the spot of what to play next.

My point is – during those shows, the amount of people who actually stopped to watch the show, was about 4-5 times more than when I was playing myself – and these were some of the greatest moments of the trip!

There’s just something about two (or more) performers that carries the show to a completely different universe – because you both radiate a lot more energies together, and people love enjoying this musical chemistry between performers.

So – always be open (and strive) for these spontaneous (or not spontaneous) collaborations – wherever you are playing at. 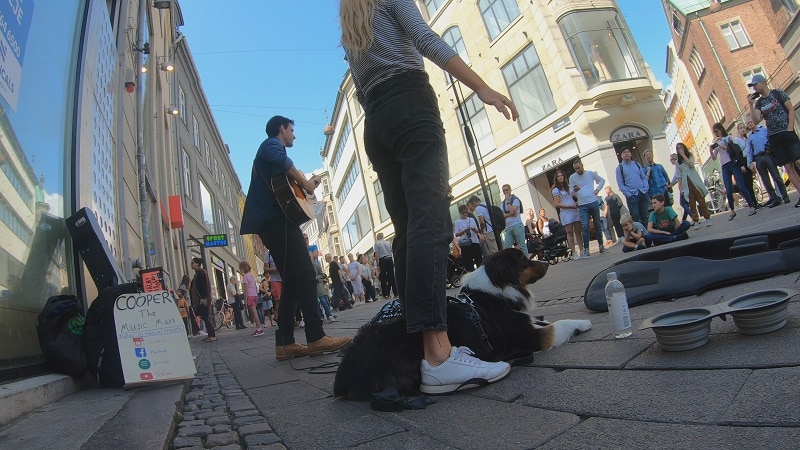 Jammin' with Alysse in Copenhagen

6 – Music is something that’s happening outside – not in our rooms.

It’s nice to play in the comfort of your house – but you’d be surprised from what you’ll learn about yourself and about your perceived skill level when you put the guitar on a strap, stand up, and try to play to people.

For one – whenever I perform to people, I’m always so humbled (and bummed as well) to realize that I don’t play even half as good as I thought I do.

That’s because I am used to sitting down in my room and thinking that I’m a badass – but the real challenge, real feedback, and the incredibly fast growth potential – are all waiting outside, with the people.

7 – The biggest lesson to aspiring artists: Playing bars and small venues is nice, but you don’t need them to get your music heard! The other way around is true.

If you live anywhere that has good weather, (and if not – take my advice and apply it to your city/town in your own way) just take yourself to a spot where people love hanging out at, like the beach or any other place – hook up your amp, and start playing.

People will love you for supplying the music to the hangout!

The numbers of people who pass by in such spots are much larger than in the average bar, so you’ll get exposure to hundreds (if not more) of potential fans in 1-2 hours of playing.

The best part is that you’ll feel an immediate feedback on your different songs from the crowd, which is in many ways better than a “captivated” crowd who might sit there throughout the entire show at a bar – but isn’t very communicative.

And if you hit those good moments in your music and you radiate good energies in your performance – you’ll see that people will stop by and have a listen to your tune! There’s no way around it, because music is all about energies, and strong music energies are hard to ignore.

If you put a sign up with your name and they really like you, you might even earn some new fans – I am personally still following a bunch of people who I discovered in the Australian streets. 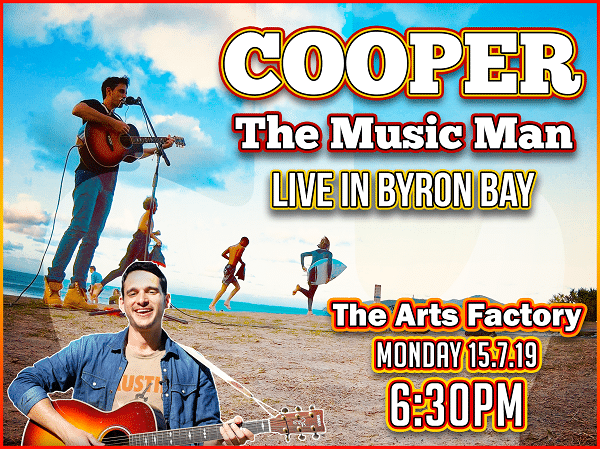 I also played a few venues during the summer, here's the poster for one of the shows I did in Australia

A note about “what you might be thinking about busking” and why you might never do it:

Yes, I know what are the negative things people perceive about buskers in many places. So let’s get it out of the way:

Like I said, if I kept being a snob and stuck to my old views of “busking is for homeless people” – I would have missed this life-changing experience.

Later, I also realized that in Australia and especially in Byron Bay the culture is different, and many of the biggest musicians started as buskers, (John Butler and Tash Sultana for example) so it’s not seen as something that only homeless people do. 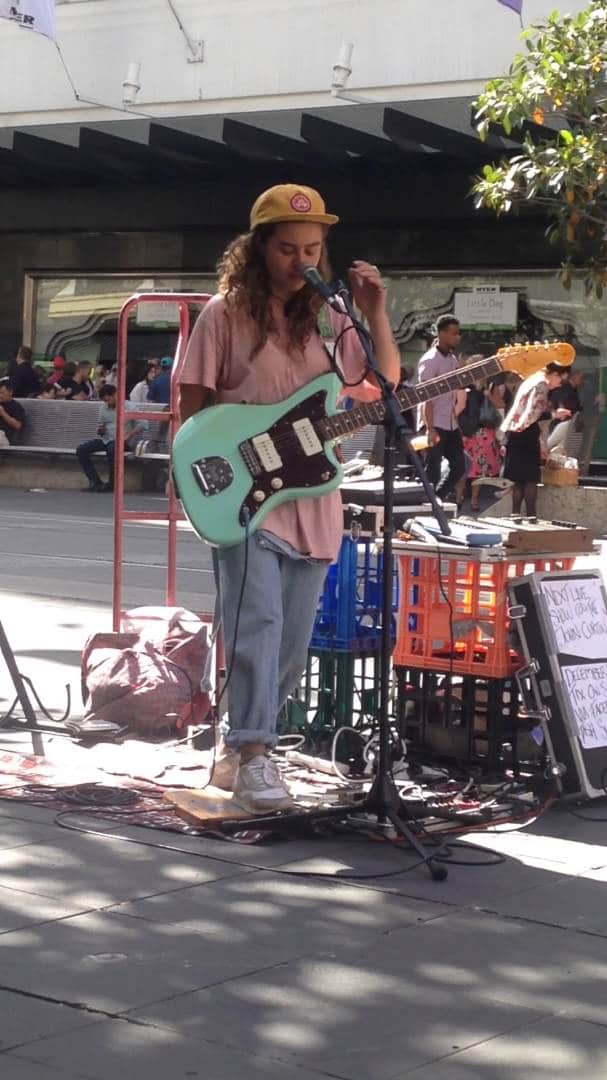 Tash Sultana, who started out busking in the streets of downtown Melbourne… 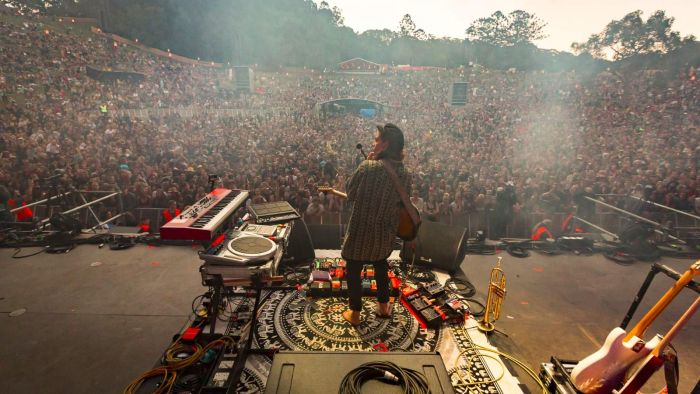 Is now playing to slightly larger crowds… (And in Australia, many of the greats actually followed a similar footpath)

Nonetheless, the act of playing music to people on the street is a huge experience that I recommend to any performer – so even if in your country you might think that it’s not a “highly regarded activity”, remember that it’s all about “how you’re bringing it”:

If you’re gonna wear dirty, teared clothes – of course that people might think negative things about you. But if you are going to look professional, dress nicely, stand up straight and captivate them with your music… Nobody is going to think of you as “less” – the other way around is true – you might even have girls hitting on you. (;

And besides… We only have one life here – so don’t waste too much time caring what people think. (Yes, it’s easier when you are 5000 miles away from home, but here – I am now back home and I chose to keep doing it from time to time!)

← Why you HAVE to get a fancy leather strap for your guitar.
Guitar Maintenance Tips – 4 Ways to Always Keep Your Guitar Perfectly Maintained! →