“Chord families” is a term that could refer to different things. It could refer, for example, to certain groups of chords like major or minor chords.

On the other hand, you can also take it into other areas – for example “thumb-over chords”, which is an informal term for a certain type of chords that you only have on the guitar.

Anyways – this post / resource would “arrange” all of the common (and also more advanced) chord families that you would encounter on your guitar journeys.

I hope it would serve you well! At the end of the post, you would find the resource in the form of a printable PDF mini-book that you can print and bind, so you can always reach out for it and learn some new chords. (any office equipment store would happily do it for you for 5-10$)

Or – just keep the mini-book on your computer desktop and access it whenever you wish. Let's begin. 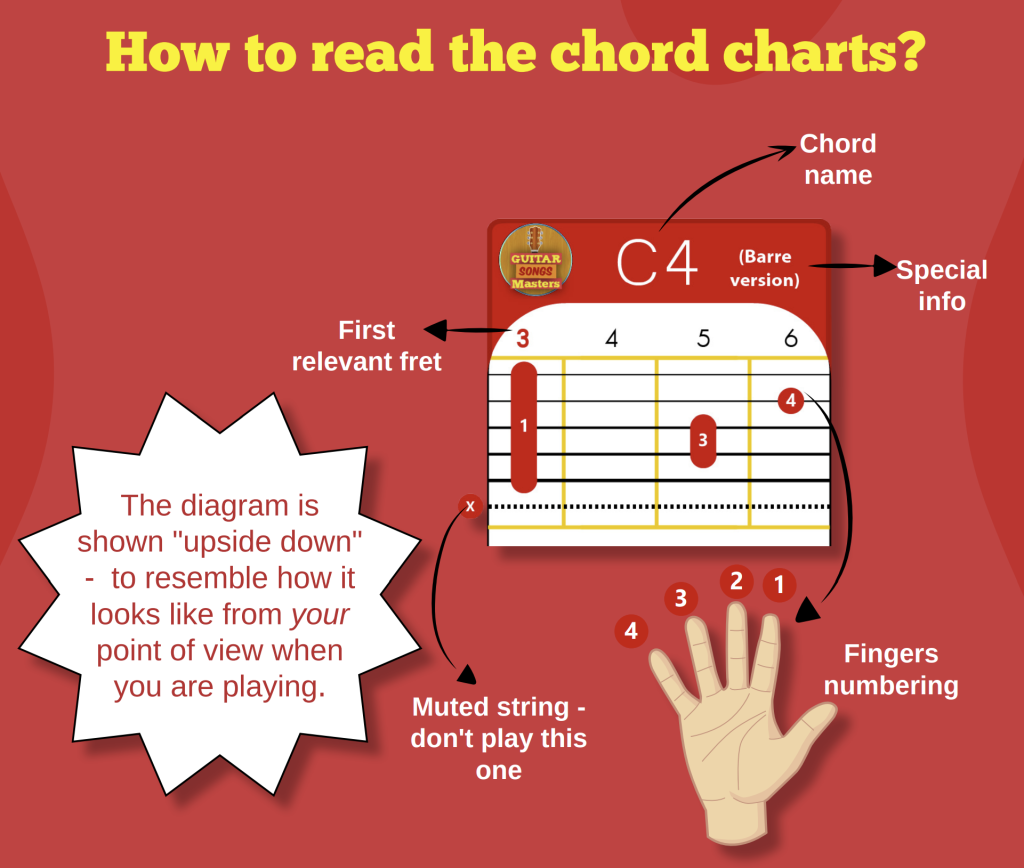 These are the chords that would “open up” the largest amount of songs for you, which is why I highly recommend starting here.

If you want to get a (funny) clue for what you can do with even just 4 chords, check out this famous video from Axis of Awesome, where they play dozens of famous songs in 4 minutes using just 4 chords. 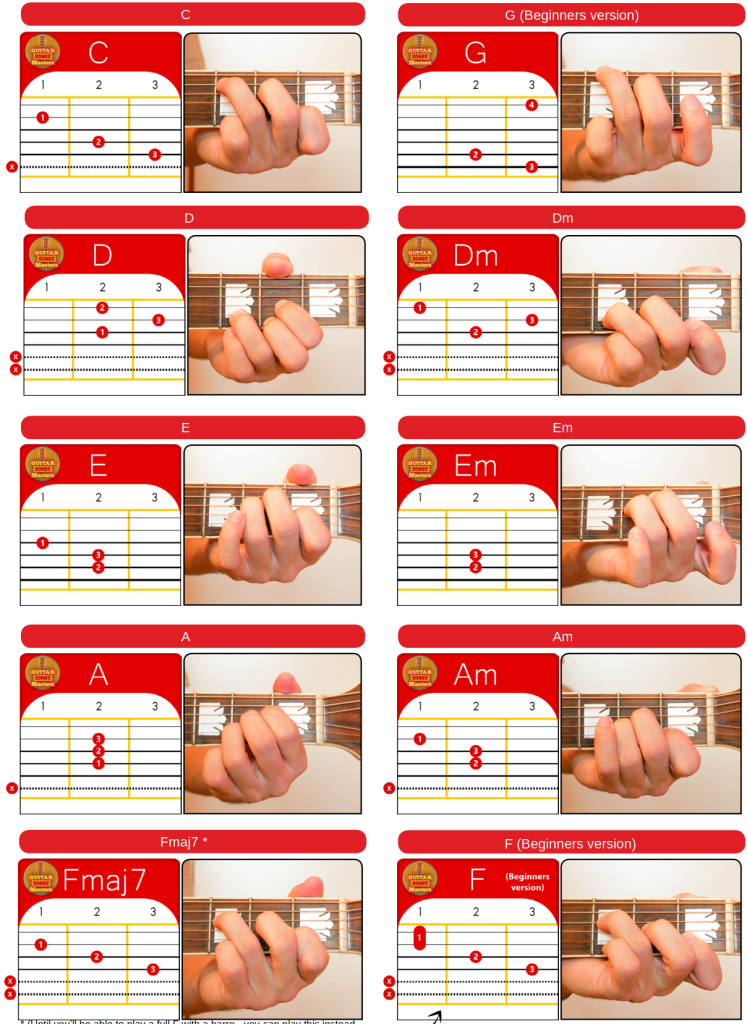 The second batch of “beginner chords” to learn

These chords below are what I would consider “the 2nd batch of chords to learn”. (in order of “usefulness”, measured by the number of songs they would “open up” for you)

This time we are already also getting into the most common “7th chords” – which is a more “flavorful” type of chords that I'll explain about below, in their own section. 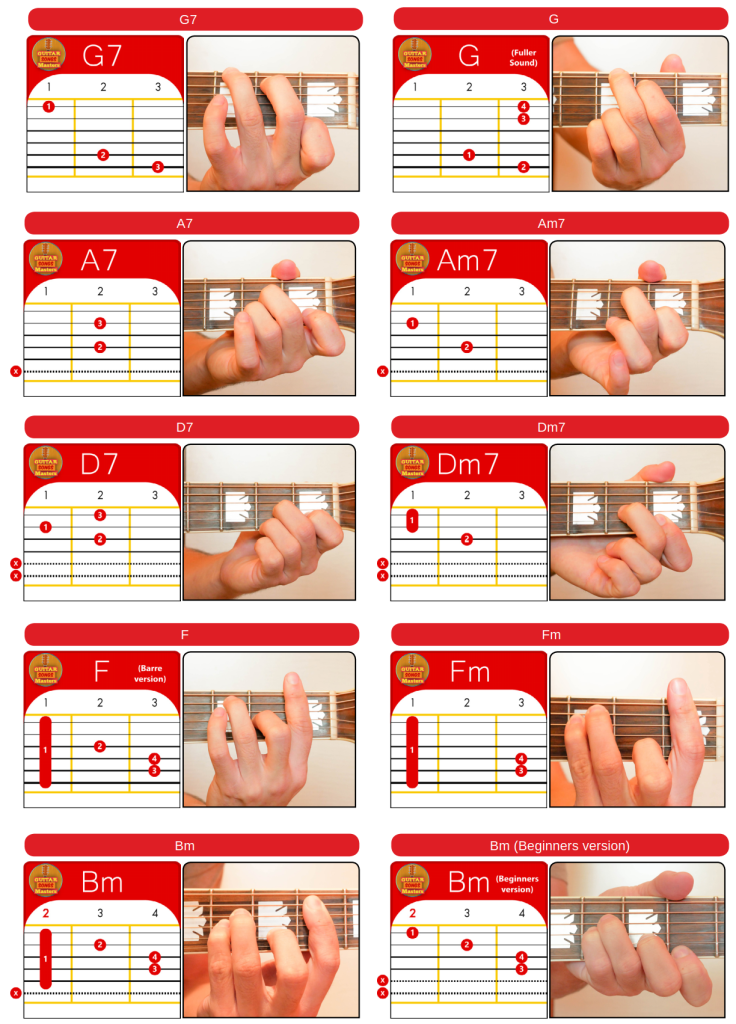 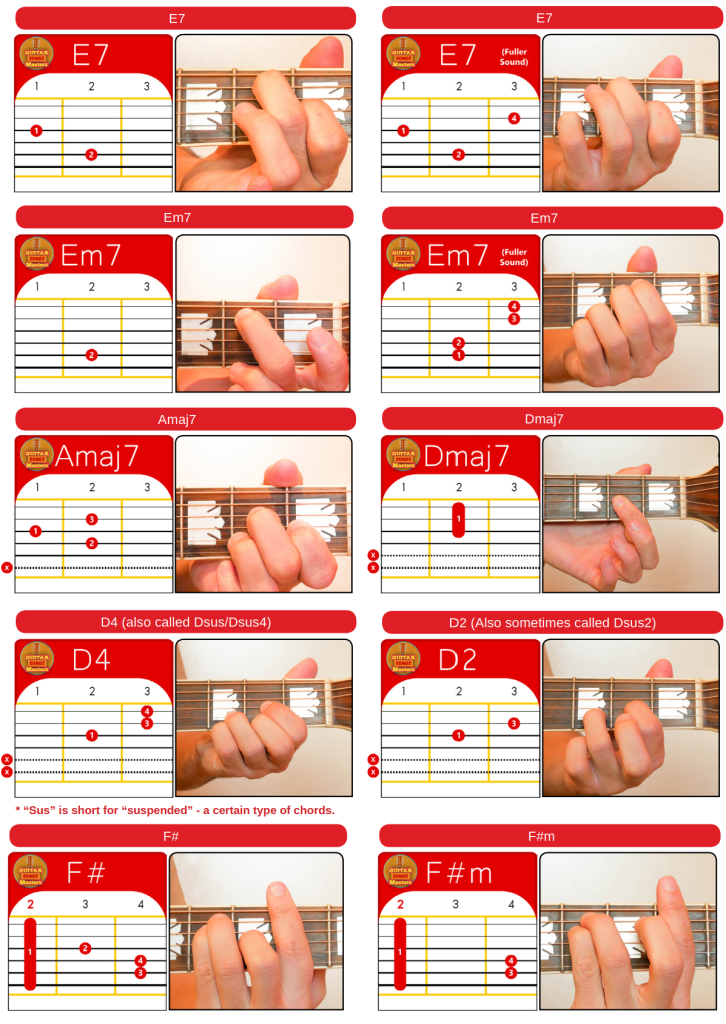 Suspended (“sus” chords) are called that way because they sound like they want to resolve back to the “regular” chords. (especially the sus4) For example, play a D chord for a few strums, followed by a D4 . Did you notice how it sounds like the D4 wants to “go back” to the D chord? Hence the “suspended” name.

They can be used for a little bit whenever you have a certain chord that lasts for a longer time, and you want to spice it up a bit.

The most common case where you would use them (at least when starting out) is on a D chord, going into a D2 or a D4.

A couple of things to remember about them:

Sus 2 chords can also be called “add9”. (but NOT just “9”, because that's a slightly different chord which is a combination of a Dominant 7 chord and a Sus 2 chord.) 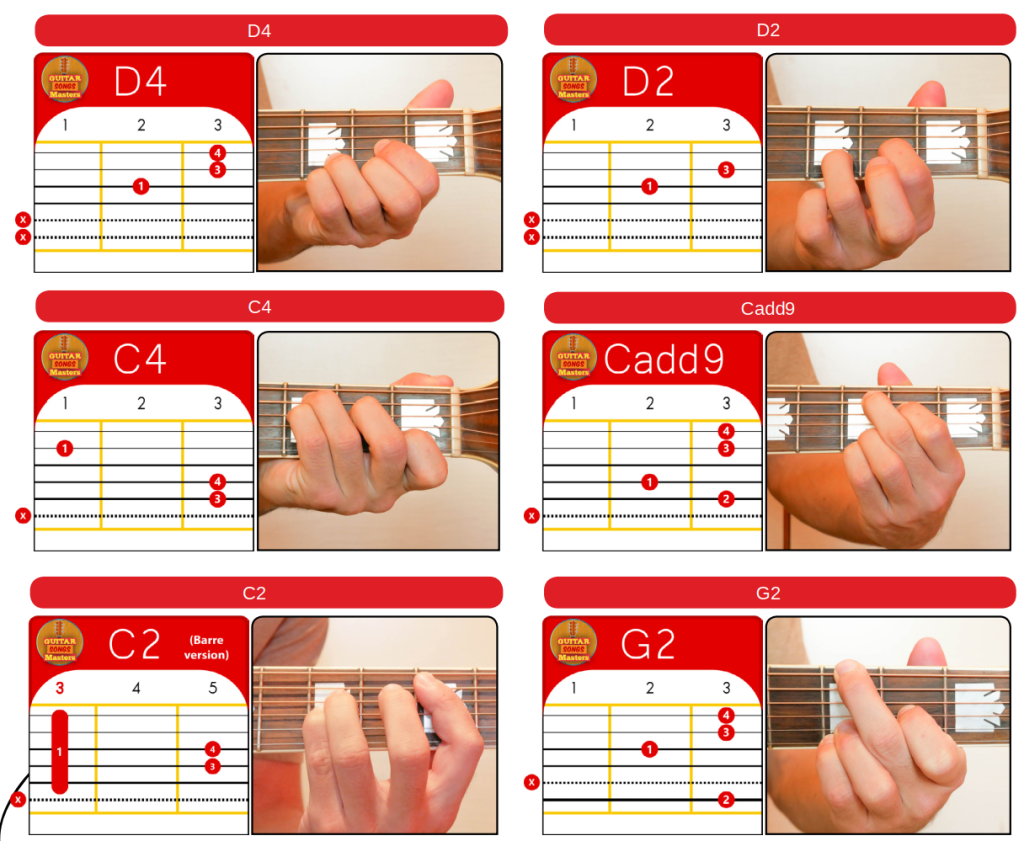 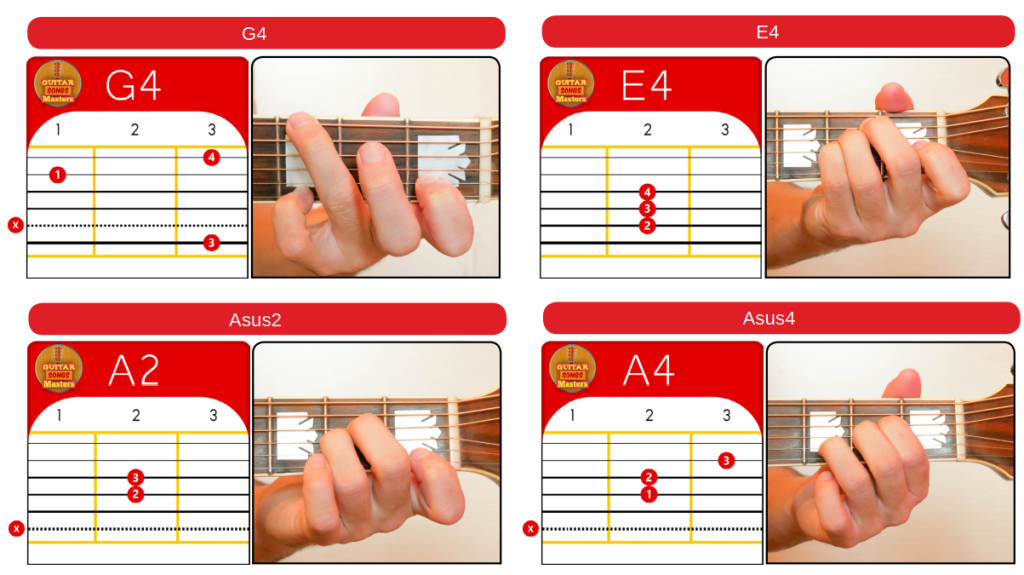 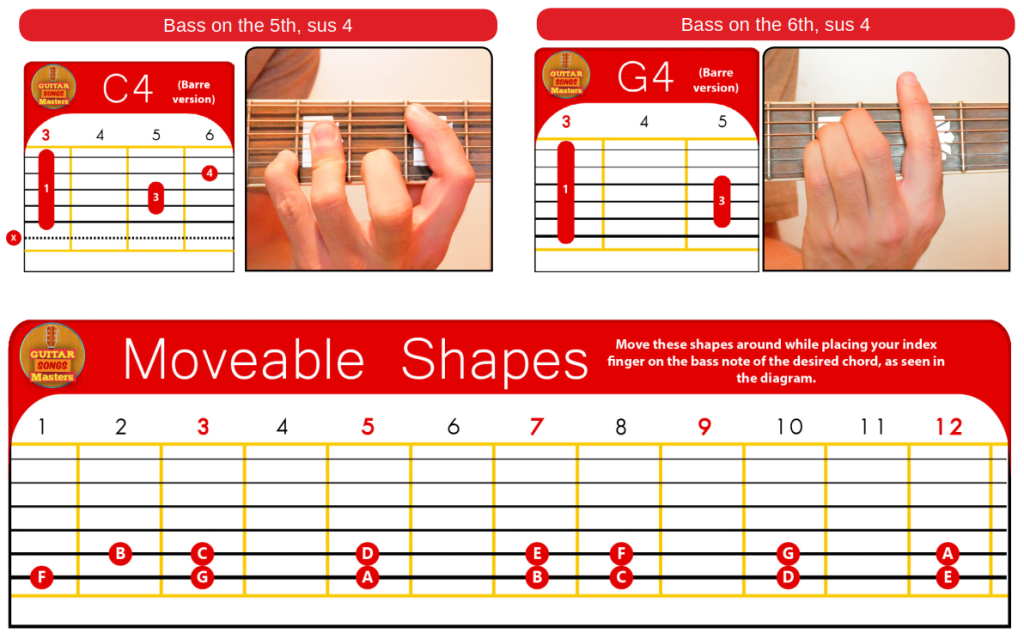 “Slash chords” are chords that are played with an added bass from a different chord. For example – a C/E chord, is simply a C chord, but with an added low note – E. In spoken terms, these chords would be referred to as “C slash B” or “C over B”. (in the case of C/B)

They can give some very interesting flavors to a chord that you've already heard a million times in a certain way. For example, instead of a D chord, try playing a D/F# and notice how much richer it sounds. 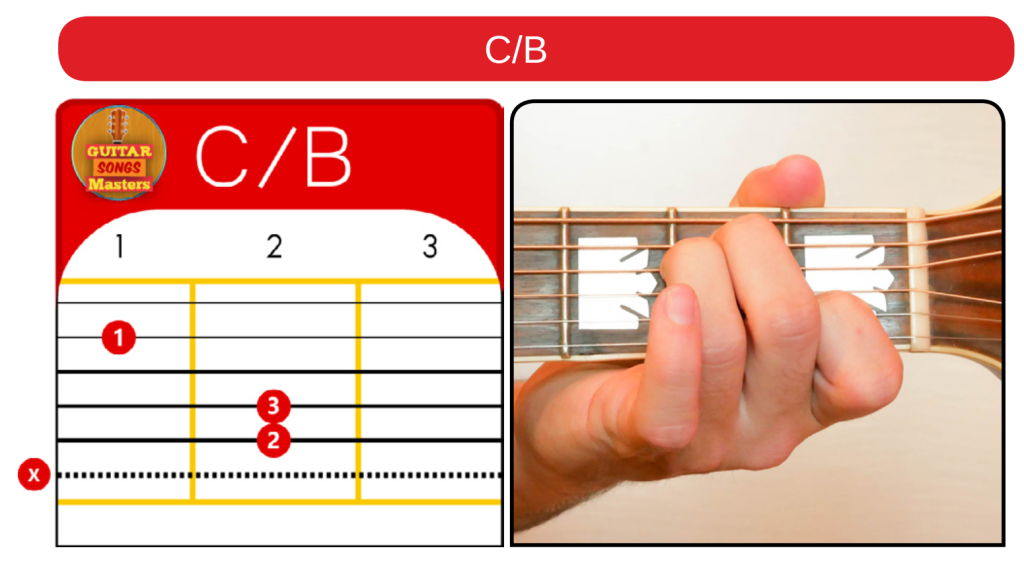 Besides the slash chords that you'll encounter as “standalone chords” on song's chord charts, you can also choose to use them as “transition chords”. For example, if a song goes from a G chord to an Em chord, you can add a touch of G/F# in between (make sure it sits with the rhythm) – to make your song-playing more interesting. G > G/F# > Em. (I like to call this technique “Bass Stairways”)

Check out the article below for some prominent examples of songs that use slash chords, and some examples of how to use them in a song:

A Crash Course in Slash Chords 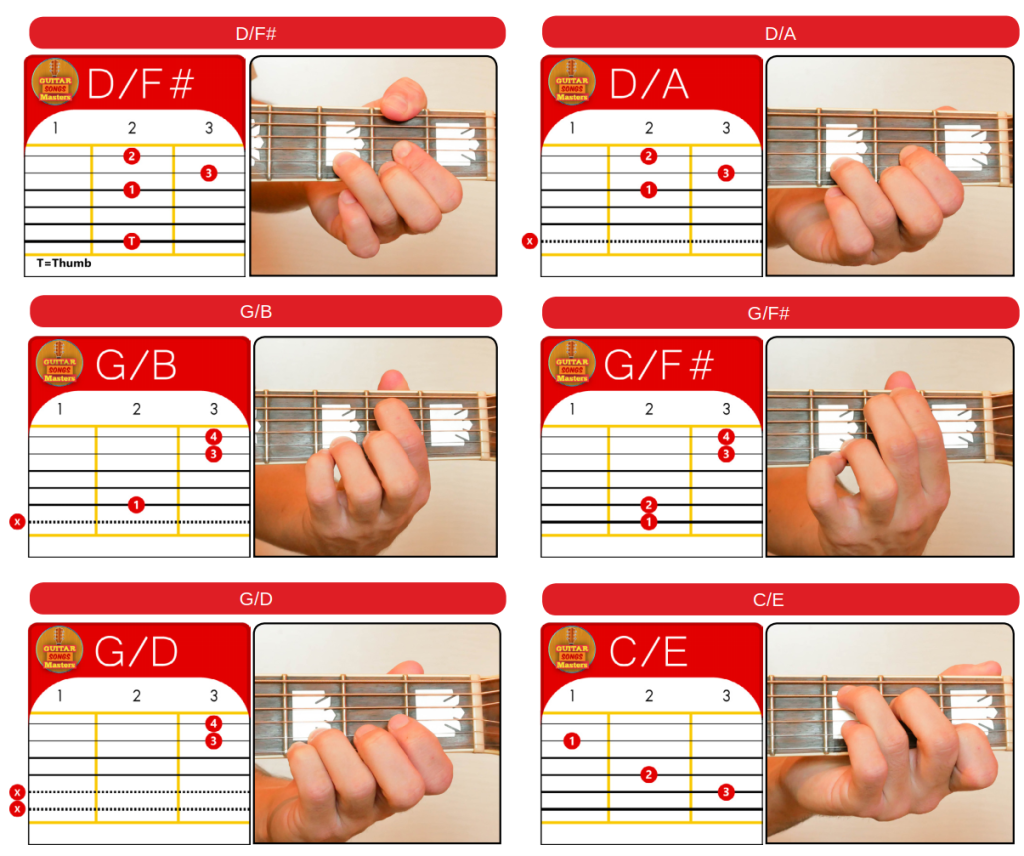 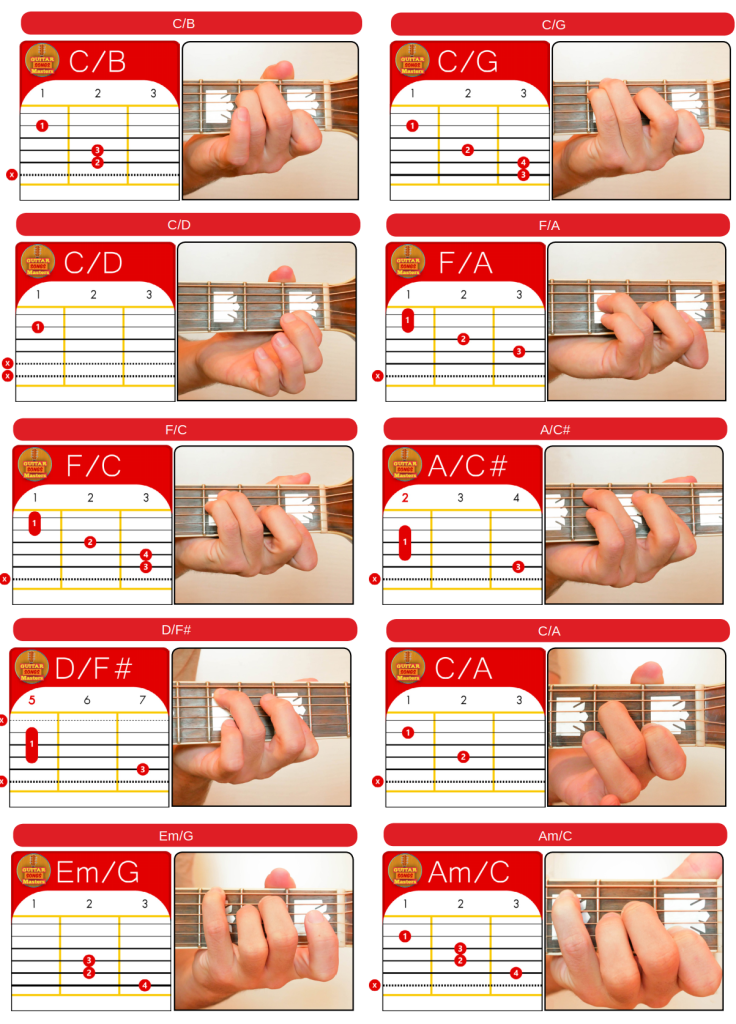 These are the most common “barre chords” that you'll encounter. Barre chords are called so because you are using your index finger as a “bar”. (the common spelling, “barre” comes from French)

All the barre chords that you see here are movable, and you can move them around the neck to get the same type of chord (major/minor/major7, etc.) but with a different root. (C major \ D major, etc.)

They can be very useful and there are certain chords that can only be played as barre chords, (for example, C#) however, my opinion is that at least on an acoustic guitar (vs. the electric) – it's always better to opt for playing an open chord instead of a barre chord.

And if you need to play some other certain chords up the neck, then you can always use a capo, which can allow you to still stick to open chords.

Barre Chords with the Root on the 6th String 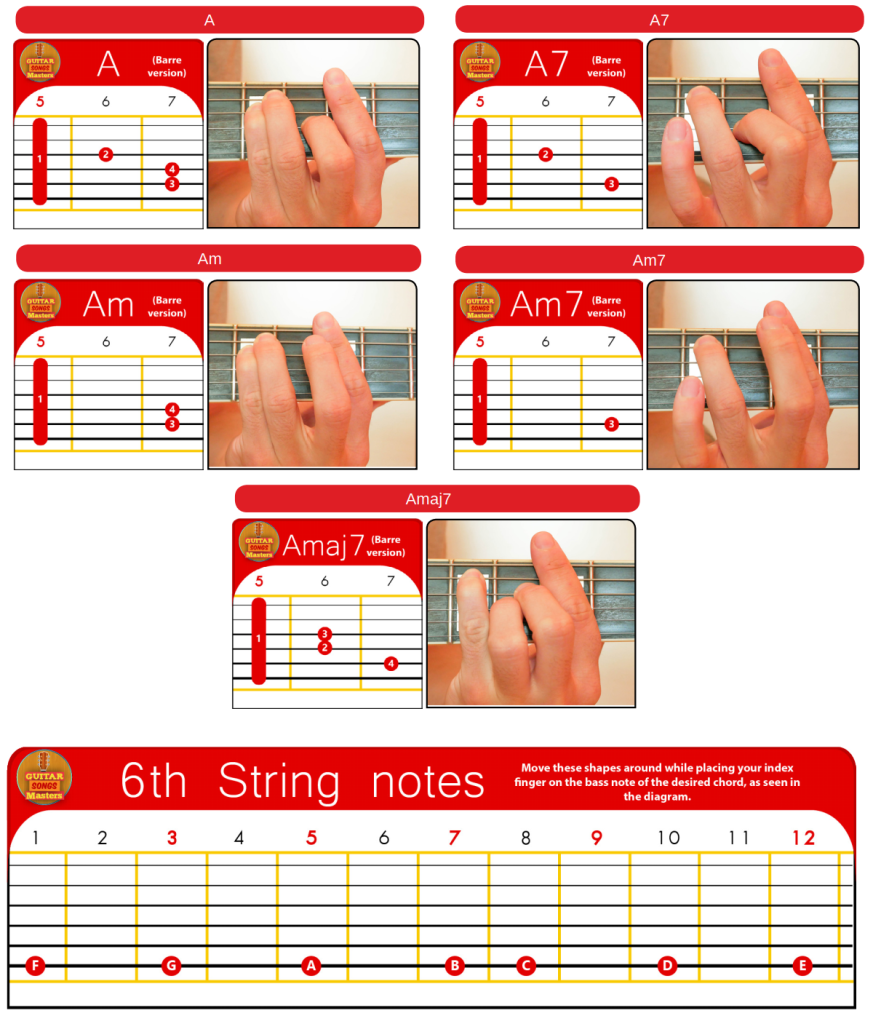 Barre Chords with the Root on the 5th String 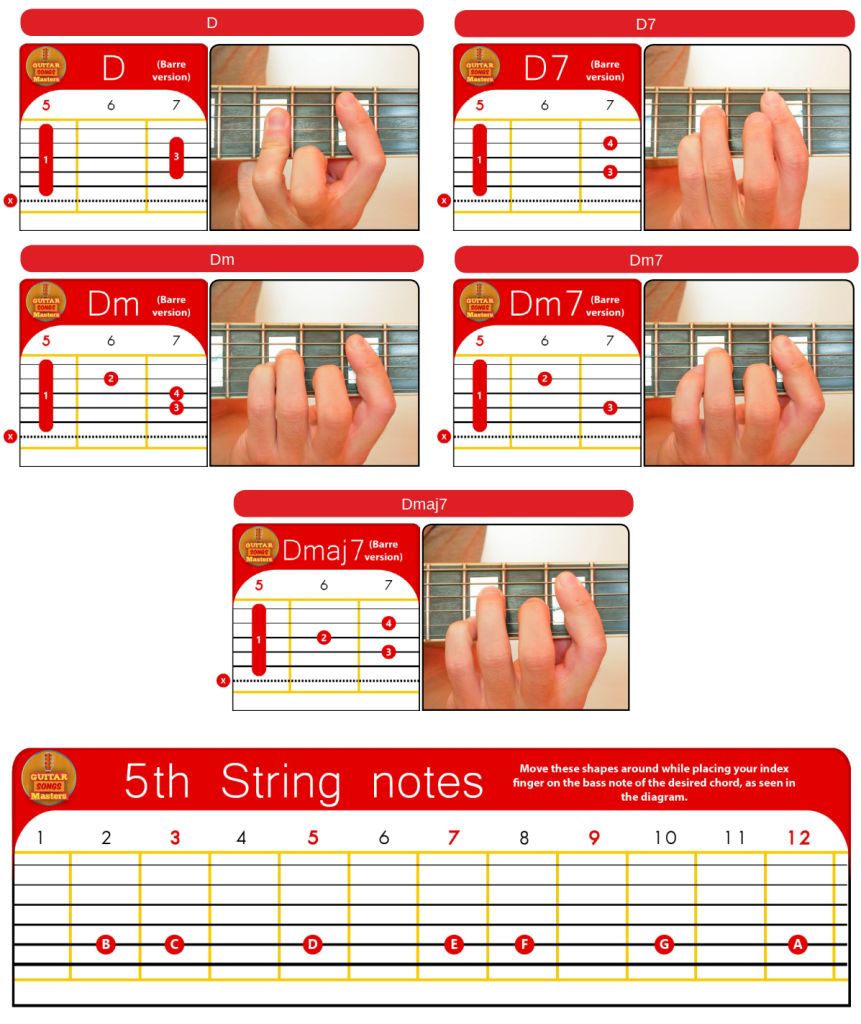 Many beginners find themselves struggling with playing their first barre chords.

If you feel that this currently applies to you, check out this video below with 5 tips on how to finally start playing barre chords with ease:

Usually common in hard-rock and metal songs, but also used a lot by beginners – since they are easy to play. Notice that power chords “don't have an identity” – since they are neither major or minor. As a result – they tend to sound more “vague”.

While it is more common to play power chords on an electric guitar, you can of course use them on an acoustic as well.

The reason that power chords sound “vague” and are neither major or minor is that they don't have the “third” degree of the chord in them, which is the one that determines whether this chord is major or minor. Instead, it only has the 1st and the 5th degree, which is also what gives these chords the “5” in their name.

Watch my lesson (also linked underneath the chord graphics) for an introduction on how to practically use them in real life, and for more useful theory background on this type of chords.

The most common power chords shapes: 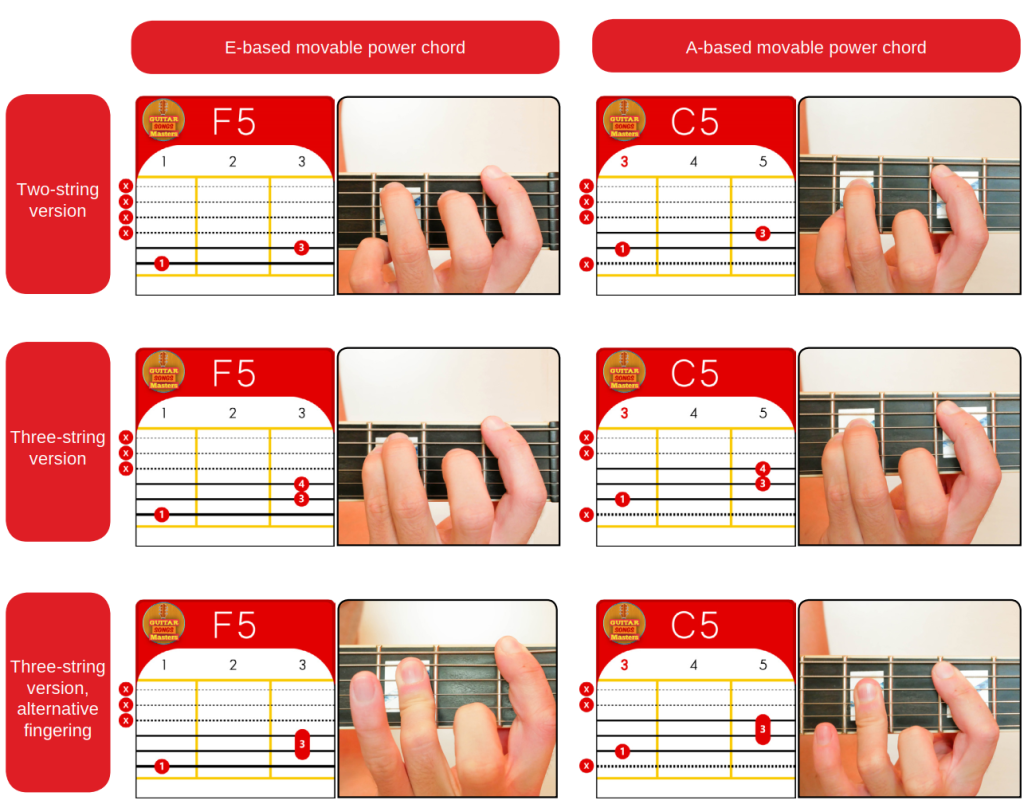 These chords give a nice, colorful “taste”. Besides playing those 7th chords when the song's chord chart calls for it – you can also sometimes substitute regular chords with 7th chords, to add that special “taste” and enrich the song. (for example, playing a Cmaj7 instead of C)

However, as with all “rules” in music – there are many exceptions in different musical contexts – so I highly recommend you try the different ideas, but above all – trust your ears to tell you what feels and sounds good.

The reason that 7th chords sound richer is that instead of having just 3 notes in the chord (the 1st, 3rd, and 5th degree of the chord), we also get the 7th degree.

The table below (originally from Wikipedia) explains the scale degrees in all the different types of 7th chords, including more advanced types such as the diminshed and half-diminshed. (if you are pretty new to the guitar, feel free to ignore these for now.

Some things to notice about the notation of these chords:

* Cmaj7 can also be called Cmajor7, or C (The triangle means “major” in jazz music sheets) 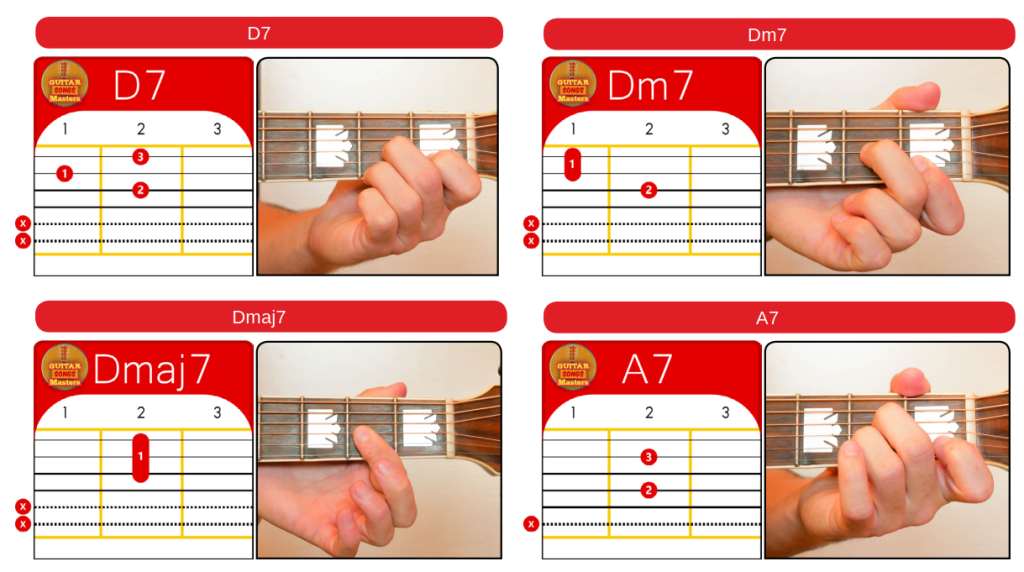 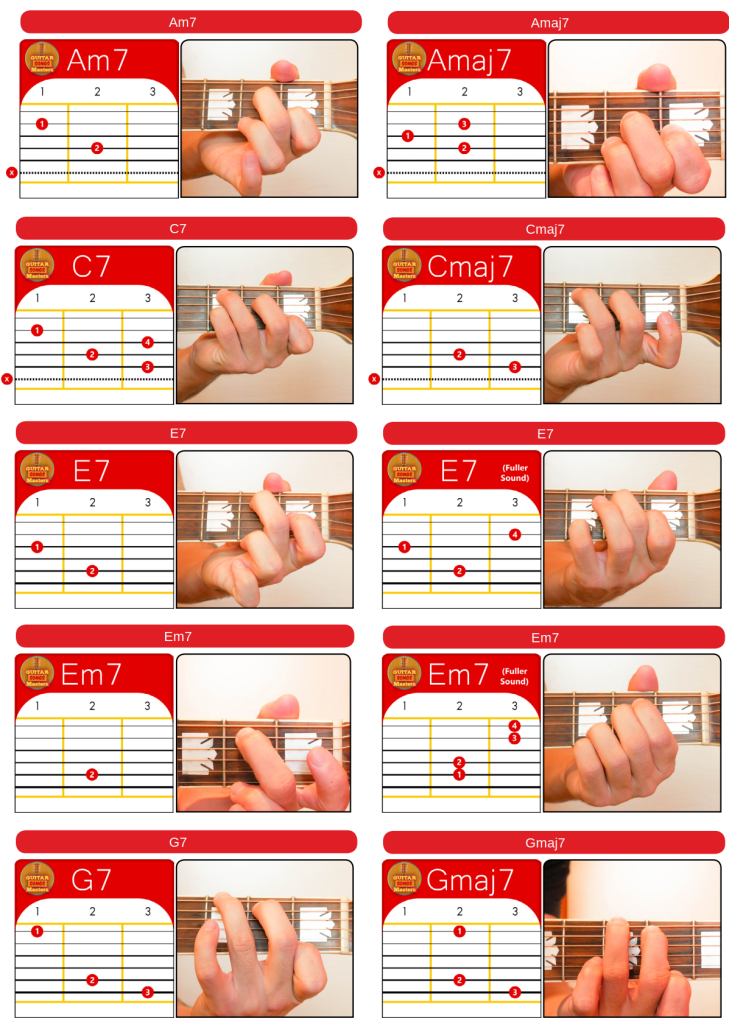 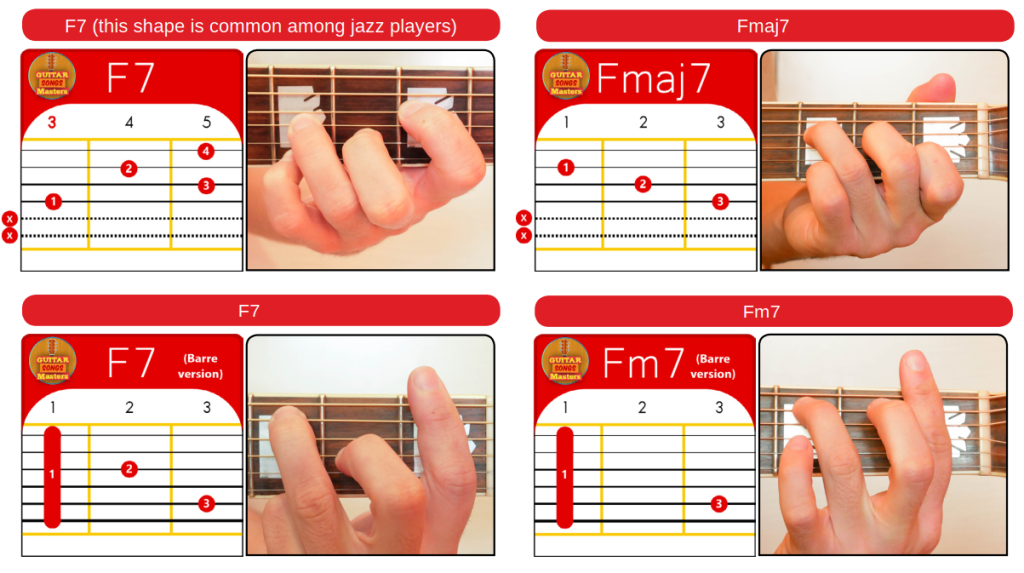 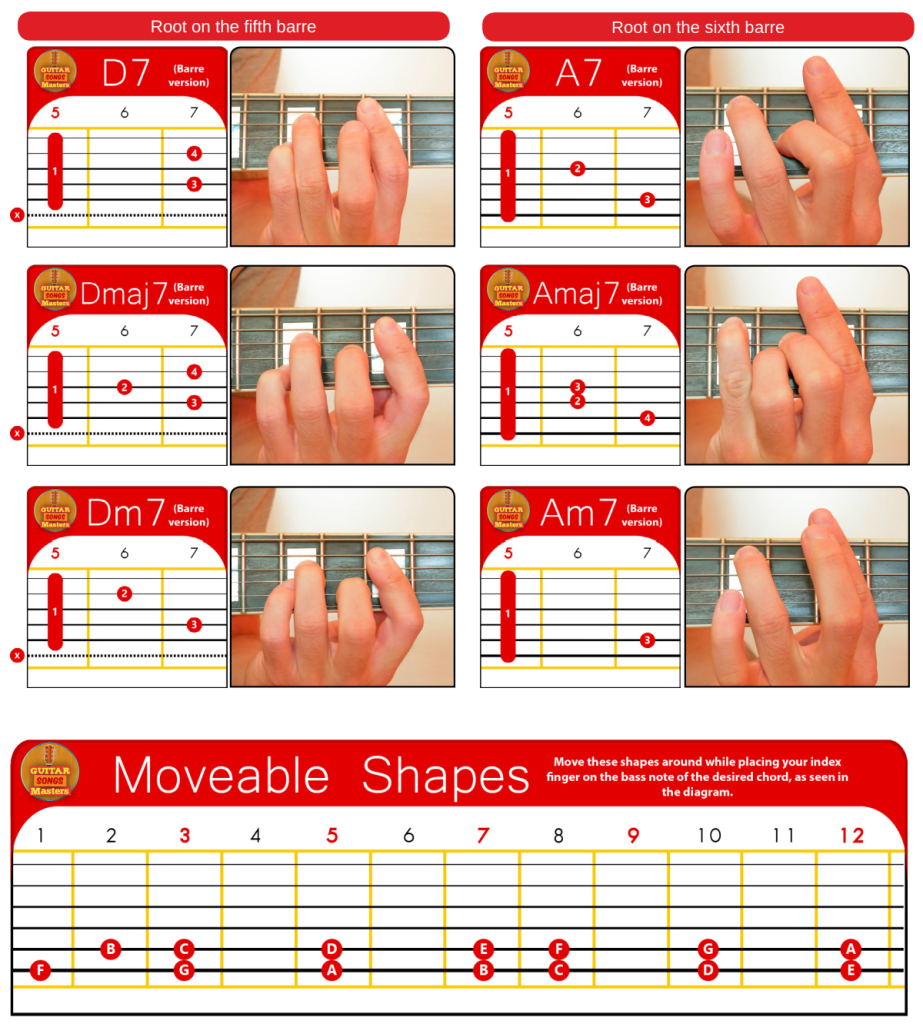 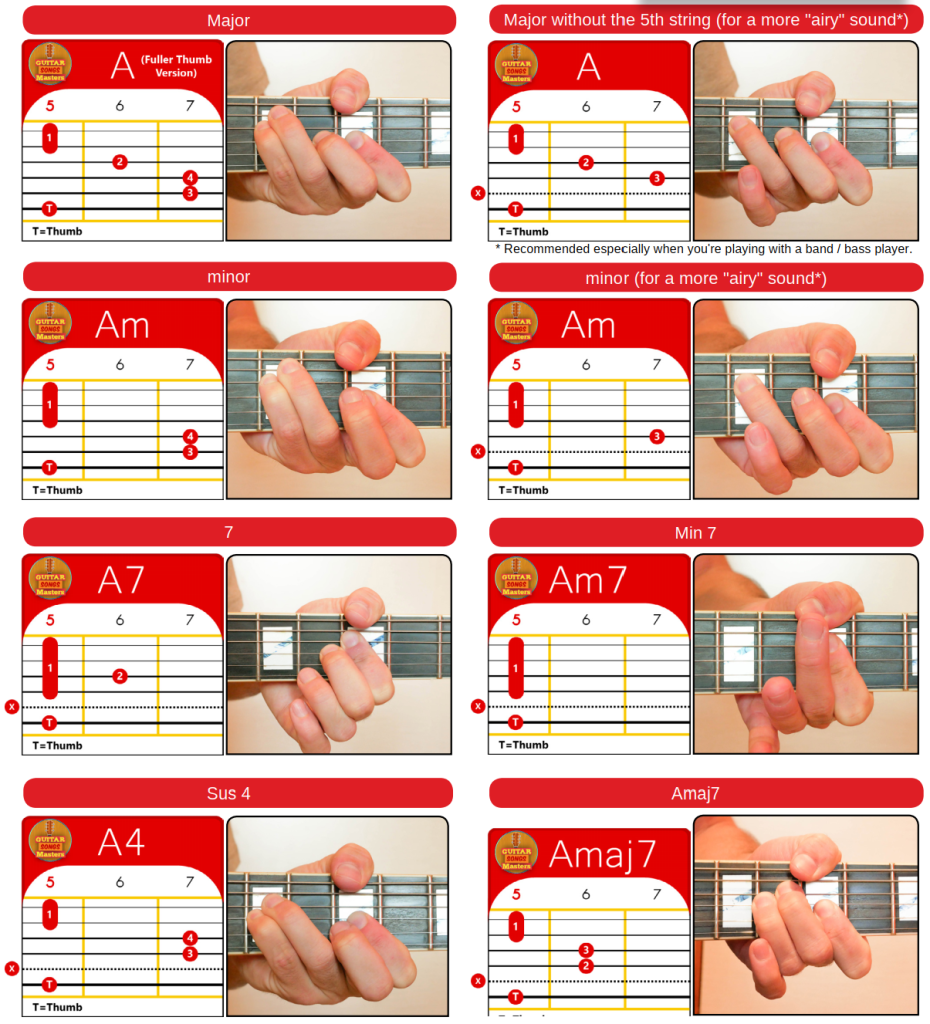 This style of chords, where the thumb is playing the bass note, has been made popular initially by Jimi Hendrix, and allows a more solid grip of the neck, (after you get used to it…) freeing up your pinky to add “chord embellishments”, playing chords that sound a bit more “airy”(where you leave out some of the bass notes) and more.

In this 60 seconds video below, I explain and show examples of why using thumb-over chords makes so much sense, and why it's the most common way to play chords up the neck among professional guitarists. (who very rarely opt for regular barre chords instead of the thumb-over versions)

One quick advantage – you'll be able to start playing Jimi Hendrix songs… (And also many other songs that use this similar style, such as “Under the Bridge” by Red Hot Chili Peppers.

Jazz guitar may seem daunting at first, but once you learn these (mostly) movable shapes, you'll start to see that these shapes simply repeat themselves – and they aren't as hard as they might seem.

Also – even if you are not into jazz – slowly learning these shapes can help you enrich your sound vocabulary and add some refreshing sounds to your songs. For example, try substituting a regular C chord in a song you love – with a C13. Trust your ears, and you'll see that you'll find some places where even just one colorful chord can add a lot to an original song of yours, or of a cover that you play. (The Beatles were the champions of using this kind of tricks)

For your first steps in jazz, the next chords should cover almost anything that you might encounter.

Before we begin, here are some common notations of jazz chords 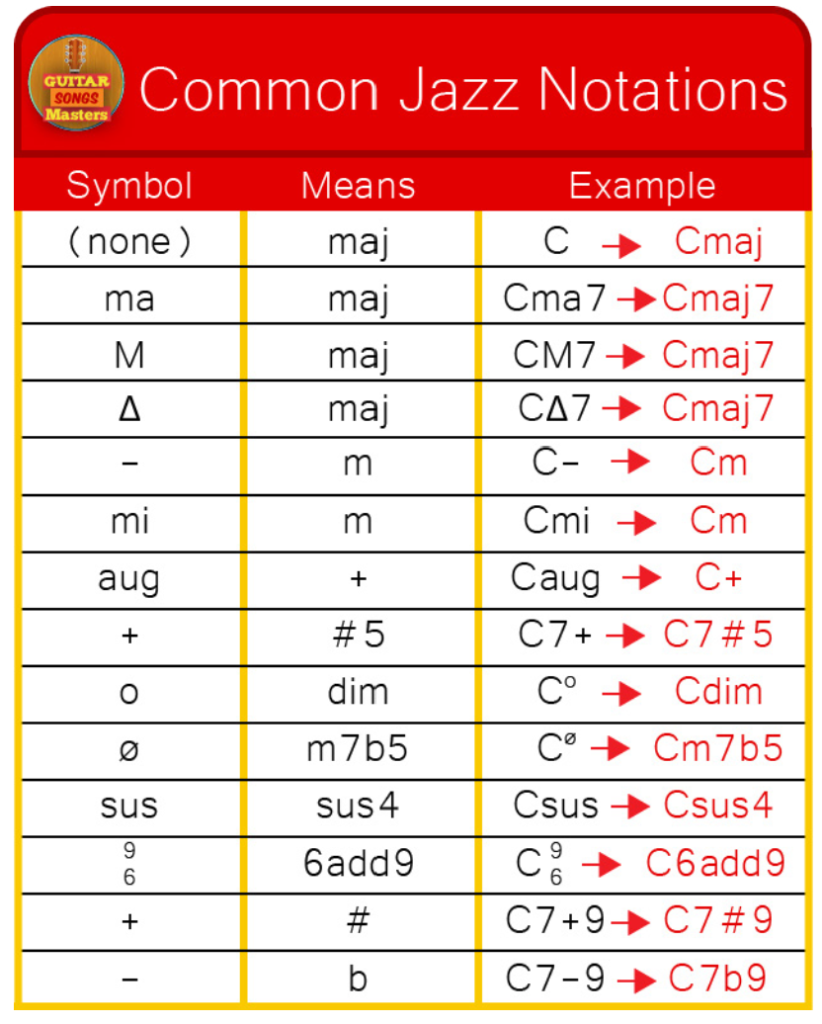 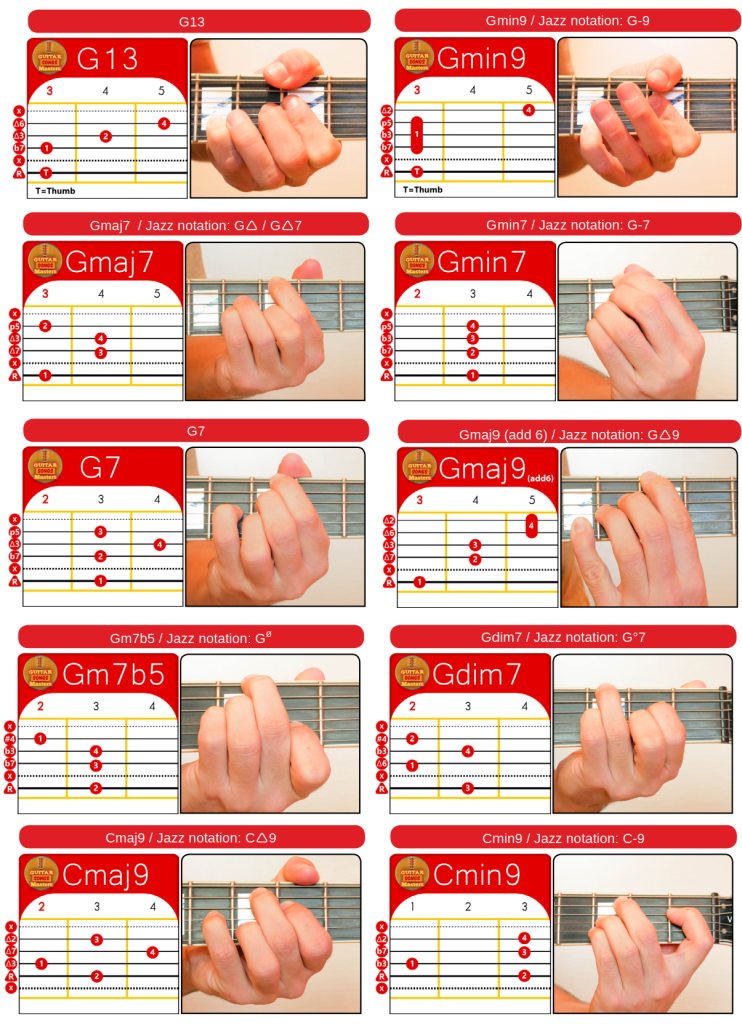 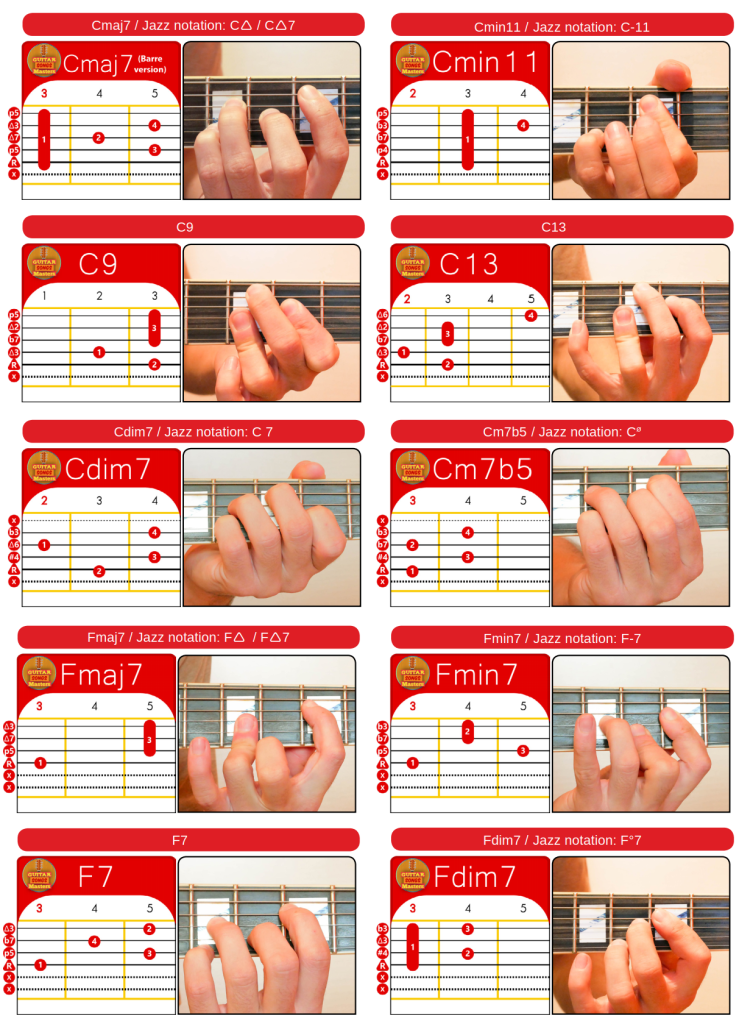 Bonus section: 4 Extra Positions for Each Major and Minor Chord
(Based on the CAGED system)

Another way to think about playing different chords up the neck, (and to “learn” more different positions for each chord in no-time) is based on what's called “the CAGED system.” For example, if you take the shape of an E-chord, and add a barre in front of it on fret 1, you get an F. If you take it up to fret 3, you get a G. Up to fret 5 – you get a G. Etc.

The same goes also with the shapes of the open C, A, and D chords when you move them up the neck. (the CAGED system also refers to the G shape, but it is not really “practical” in terms of comfortably playing chords with it up the neck, so I did not include it here.) 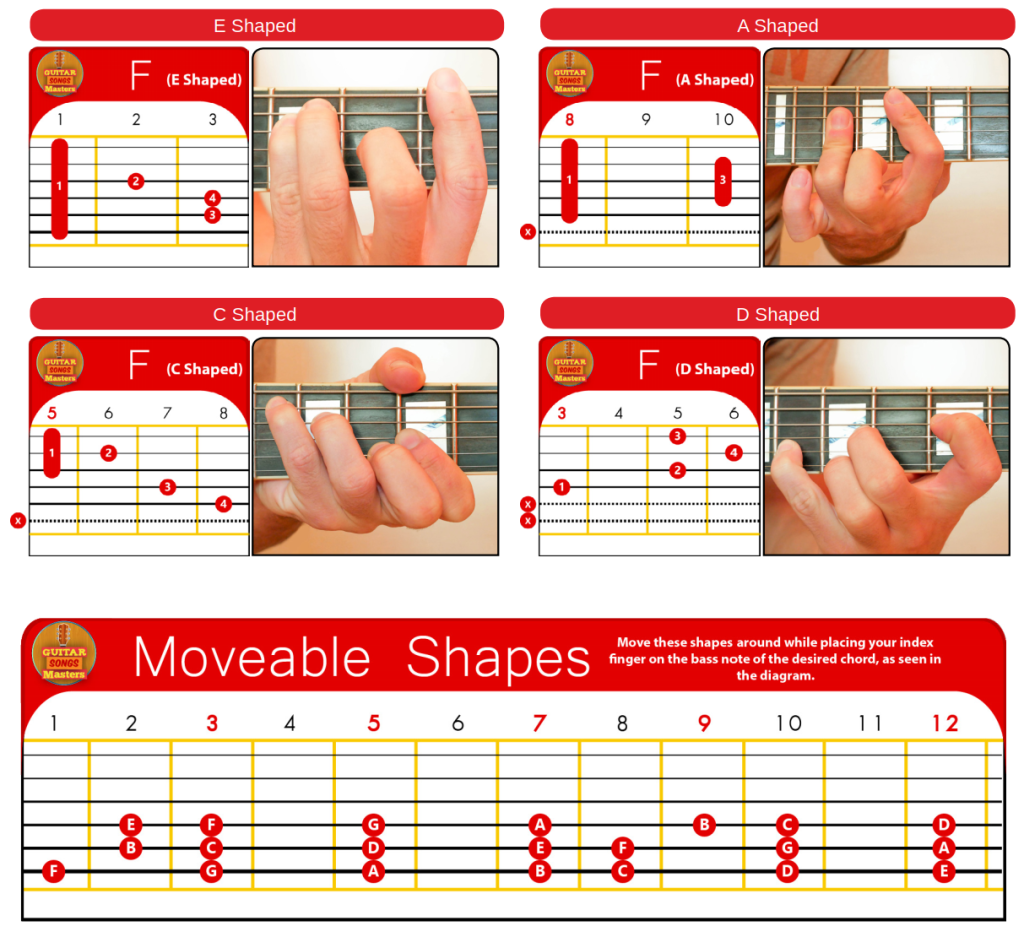 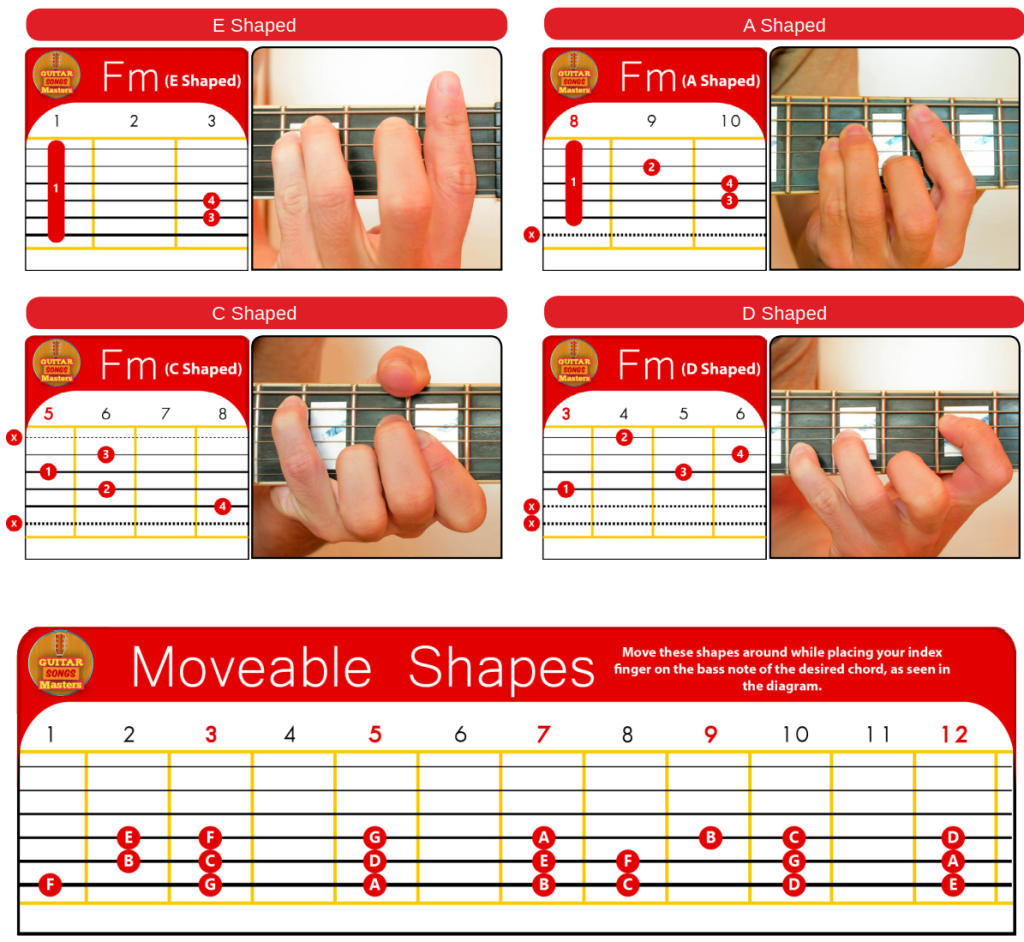 A printable 25 pages resource that covers hundreds of chords – the most practical ones that you'll want to learn throughout your guitar journeys.

“Check out Guitar George, he knows all the chords”… 😉 (Dire Straits – Sultans of Swing)

I hope it's been helpful. Let us know in the comments – what's your favorite chord or favorite type of chords.

And don't forget to check out the ebook – it also has some extra resources that weren't here. (such as the quick-theory guide to creating chords)