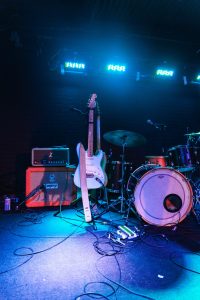 If you’re a musician that loves to play guitar, you’ve probably heard a few musically themed puns. Since guitars are one of the most common instruments with recognizable sounds in many styles of music, you’ll find many terms and attributes of guitars incorporated into puns!

Puns are a fun, light-hearted, and humorous play on words. It’s a great ice breaker and conversation starter, especially if you’re among musicians and music enthusiasts who enjoy a sense of humor and jokes that play on the meaning of words.

What Are the Most Common Guitar Puns?

Whether you’re a fan of guitar or music-related puns or find them “cheesy,” they usually result in a bit of laughter and a great introduction into a discussion about music. You’ll find guitar puns vary from the simple and more commonly used phrases, usually one or two lines, to a wittier and creative pun that’s impressive and likely to capture more attention!

“Woody couldn’t play his guitar because he didn’t know where his Pixar!” – a play on the similar sound of Pixar and “picks are”

“Once John, George, and Ringo went to a musical instrument shop to buy an electric guitar. They were less Pual!” – a play on the brand Les Paul

“My friend wanted to post a Tik Tok video of him playing the guitar but then decided against it as it would probably be band!” – a play on the similar sound of ‘band’ and ‘banned.’

“If a brewery botanical had an active interest in playing the guitar, he would probably be called Ginny Hendrix!” – a pun built on the similarity between “Jimi” and “Ginny.”

“Last night in a bar, a guy tried to attack me with the neck of a broken guitar. I retorted out, “Is that a fret?” – a play on the similarity between “threat” and “fret.”

“Last night, I was cooking pasta and was short of herbs. My wife’s guitar came in handy as I could add some bass-il.” – a play on “basil” and “bass-il” having the same sound

These famous two-line puns are ideal for adding a bit of humor with the same play on words as one-liners.

Question – “What is the difference between a rock guitarist a jazz guitarist?

Question – “What do you call a guitar that never finishes a job?”

Question – “Did you hear about the guitar player who was stressed?”

If you’re looking for guaranteed laughs from other musicians, you’ll find these puns are witty and easy to lighten a discussion and create some serious laughter.

“While playing air guitar, the best chord exercise that one can do is with the vocal chords!”

“My brother dropped my electric guitar on the floor, and it made a hole in the marble tiles. Guest, he had no idea it was a heavy metal guitar!”

“Bass guitarists avoid romantic dinners at all costs. They don’t want too much treble!”

There are puns specifically for lead and bass guitarists, guitar teachers, and music genres. These are based on humor based on the nature of their playing style, stage presence, and performance characteristics.

“How do you make a lead guitarist slow down? Put a piece of sheet music in front of them.”

“How many lead guitarists does it take to change a light bulb? None and they steal somebody else’s light.”

“A bass guitar and an oboe had an affair. It was very low-key.”

“How many bass players does it take to change a light bulb? It doesn’t matter, and bass players are never in the light anyway.”

“My guitar teacher was a magician turned artist. He would always start our lessons with ‘Pick a chord, any chord!’”

“Where did the guitar teacher leave his keys? On his guitar.”

“Why did the music teacher go up the ladder during music class? To reach the high notes.”

“Why do electricians hate rock music? Too many power chords.”

“A friend is in a sea-themed rock band. He’s going to tuna guitar.”

“What do you call a metal statue of somebody playing an electric guitar? An iron maiden.”

“Did you hear about the heavy metal player who locked his keys in the car? He had to break the window to let the drummer out!”

“Two jazz guitarists meet in a bar, and one says, ‘Yeah man, I bought your last album, it was awesome,”’ to which the other replies, ’Oh so that was you!’”

Guitar Puns That Focus on a Style of Music, Musician, Chords, and Instrument Brands

The more specific the pun, the wittier you’ll sound! A bass player may appreciate a pun that plays on their role in a band, rather than a general pun that’s not too inventive or original. Jokes about chords, brands, composers, and specific musicians are always fun too!

“Middle C, Em-flat, and G walk into a bar. ‘Sorry,’ the bartender says to the Em-flat, ‘We don’t serve minors here.’”

“I like guitars. They strike a chord with me.”

“What was Beethoven’s favorite fruit? Ba-na-na-naaaaa.”

“My girlfriend left me because I was obsessed with Linkin Park. But in the end, it doesn’t even matter.”

“There’s a magician who can fold even the highest-quality guitars in half. He’s known as ‘Fender bender’”.

Creating Your Own Guitar Puns

Whether you’re a new guitarist learning the basics, or an experienced musician who plays professionally, you may come up with your puns based on local musical talent, a specific guitar-playing trend, and other fun ideas that you’ll think of during a lesson or practice session.

Guitar puns are a fun way to get acquainted and conversational with other musicians or as a way to break the ice with a bit of humor.