One important thing to remember though is: you TOO can do it, and it’s probably less hard than you think. But so far there’s probably nothing new here for you…

However, the most important thing to remember is that unless this person has absolute pitch, (which is only something that 0.01-0.1% of the population has according to Wikipedia) there is a big disadvantage to this method…

And that is that since you’re tuning the guitar to itself, tuning by ear is limited to those times when you are playing by yourself.

And if you want to play with other people, you’ll definitely want to take out a tuner and make sure that you are all indeed tuned the same way.

(there's actually a workaround for this, but we'll save it for the end of this post) 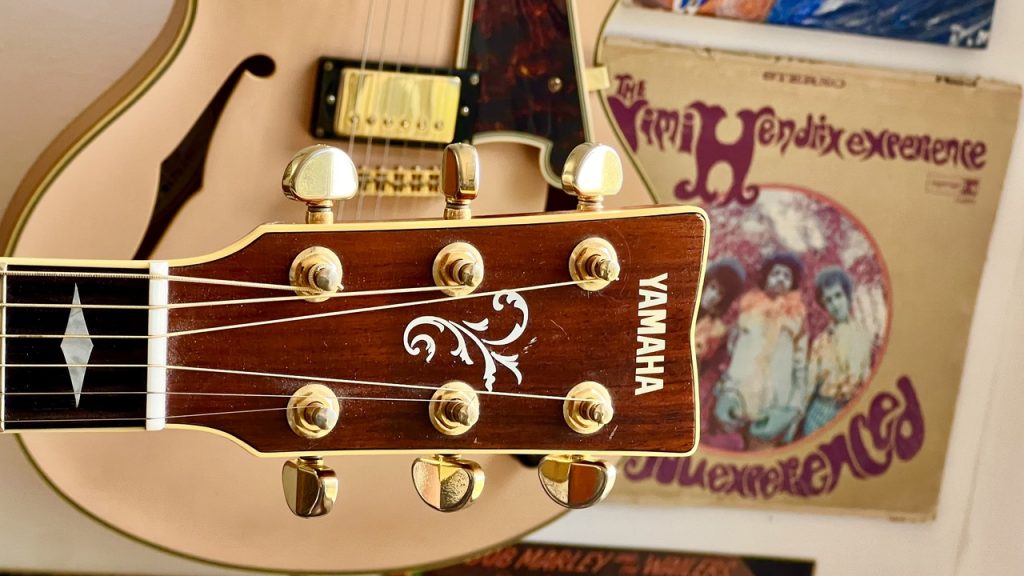 The 2 Common Methods for Tuning without a Tuner

The most common method that you've probably been thought / learned early on in your journeys is the “5th fret method”.

The advantage of this method: it's relatively easy to be done even by beginners, since you don't need to produce harmonics, which might be trickier for beginners.

The disadvantage of this method: since the sounds that you are tuning to in this method are lower-pitched than the ones you're using when tuning through harmonicas, it might be harder to actually hear whether the strings are in tune or not.

Explanation & demonstration video of the 2 methods

How to actually do “the 5th fret method”:

1 – Press your fretting finger on the 5th fret in the lowest E string (the one that's closest to your face) and play the string.

2 – Play an open A string (the string below it – which is the 5th string). Your goal is to match the sounds of these two strings.

Tip #1: In the beginning, it might be hard for you to tell if the A string is lower or higher in pitch (and thus – in which direction you need to turn the tuning peg) – so a good way to help you “hear” and “feel” the pitch better is to HUM the sound of the first strings that you play, and then hum the sound of the next string.

When you are physically using your vocal cords instead of just your ears, it can make it easier to tell the difference, because you can feel, especially after some practice, whether your voice went down (to a lower pitch) or up (to a higher pitch)

Tip #2 – which I demonstrate at 9:05 in the video: Instead of playing these strings one-by-one, you can play both of them at the same time. When they are in tune and played at the same time – it would oddly sound as if you are only playing one string. (literally, if someone closes his eyes and listens, he would be hard pressed to say that two different strings are being played)

3 – When the E string (6th string) matches the A string (5th string), move forward by pressing your fretting finger on the 5th fret of the 5th string, and repeat the process – this time between the 5th fret and the 4th fret.

4 – Do the same between the 4th string and the 3rd string.

5 – Between the 3rd and the 2nd string comes a tricky part that you need to remember. Instead of pressing down the 5th fret, you want to press down the 4th fret, then match the sound you're getting there with the sound of the 2nd string. 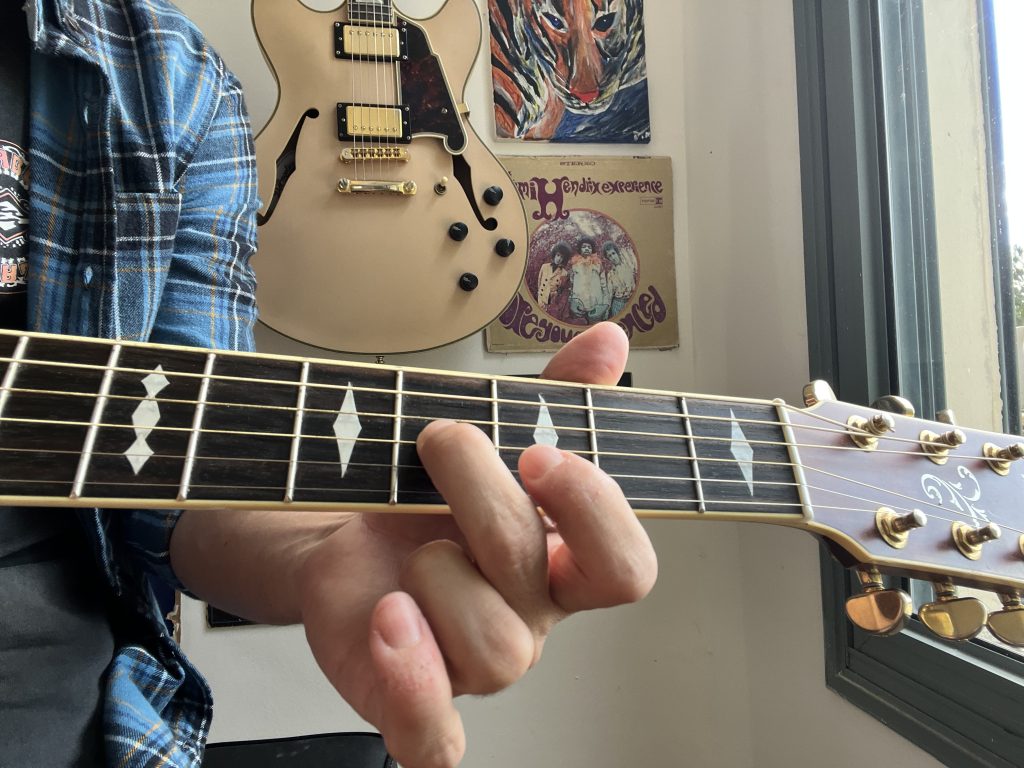 Notice that between the 3rd string and the 2nd string, “the 5th fret methods” turns into “the 4th fret method”…

6 – Once this previous pair is tuned, (3rd and 2nd) move down to tune the 2nd string and the 1st string, this time while coming back to pressing down the 5th fret of the 2nd string.

7 – strum a few chords and see if it sounds in tune. If not – go back to the string that seems iffy. (it might mean you'll need to do some more adjustments also on all the strings that are below that string, since that mistake has probably carried on to the next strings…)

Tip #3 – which I demonstrate at 7:15 in the video: in order to keep hearing your “reference” note that you're tuning the string to, it is good to avoid the instinct of removing your fretting finger from the 5th fret (which would obviously stop the sound…), and instead of using the fretting finger to twist the tuning pegs while the sound is only in your memory…

You can simply do it the other way around – leave your left hand finger to press down the string, while taking the right hand all the way to the headstock of the guitar, and twisting the tuning pegs while that reference note is still ringing.

The advantages and disadvantages are pretty much those that we've had in the previous method, but in reverse order. Let's check them out.

Advantages of tuning with the harmonics method: the higher pitched sound of the harmonics makes it relatively easier to hear whether the two strings are in tune with each other or not.

Disadvantages: It can be a bit tricky to create the sound of the harmonics. (even with years of experience we sometimes have “duds” and need to try again.

We can create harmonics on the 5th fret, the 7th fret, and the 12th fret of the guitar.

In order to do it, 1 – lightly place your finger above the fret (the metal piece itself) – without pressing the string down. 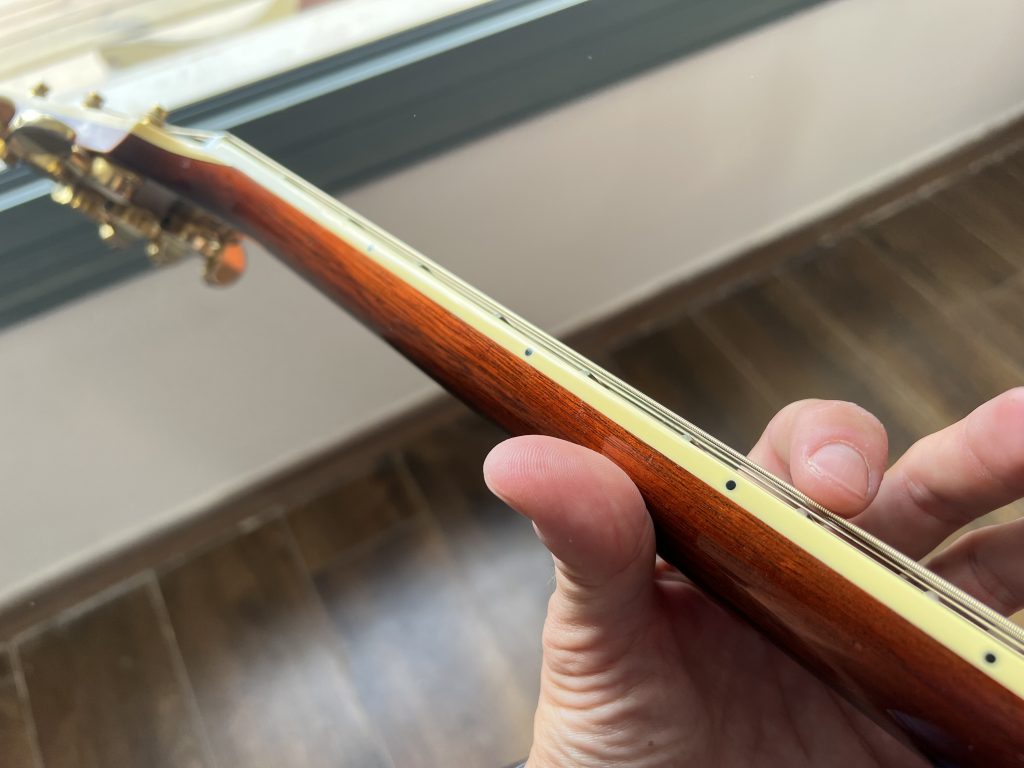 2 – pluck the string while at the same time life your finger off of the string.

This would require some practice, but it does reward you with some of the nicest sounds that the guitar can create (;

The process of tuning using harmonics

Just like in the previous method, this time we are also going to start with the 6th string, the E string, that's the closest to your face, and tune everything relatively to it.

Tip #4 – which I demonstrate at 3:55 in the video: something that would help you tune better by ear – is if you notice those “wobbles” (the sounds that sound like “wa-wa-wa-wa-wa”) that you hear when two notes that are tuned slightly apart from each other are played at the same time. Your goal is to make those wobbles disappear – which will happen when you get the two strings to the same pitch. The longer that these “wa” sounds are – the farther out of tune these two strings are from each other – so this could help you as a sign that you're “getting closer”.

2 – Repeat the same process between the 5th string and the 4th string.

3 – Repeat the same process between the 4th string and the 3rd string.

6 – Again – strum a few chords and see if it sounds in tune. If not – go back to the string that seems iffy. (it might mean you'll need to do some more adjustments also on all the strings that are below that string, since that mistake has probably carried on to the next strings…)

In case you indeed want to play music with someone else but both of you don't have a tuner – you can still do it by tuning to a reference note.

What that means is the one person between you who you think already sounds more in tune would play his low E string. Then the other person would tune to that E strings – and from there you would use either one of the methods above…

This is it! Enjoy your jam.

I hope this post has given you some great ideas, and if you want to have another bunch of song ideas in a fancy PDF songbook form, then feel free to download the songbook in this link.

You'll find more details about the songbook underneath these two pictures (and don't worry, there's a lot more to it than Hallelujah and Wonderwall, you'd be delighted.) 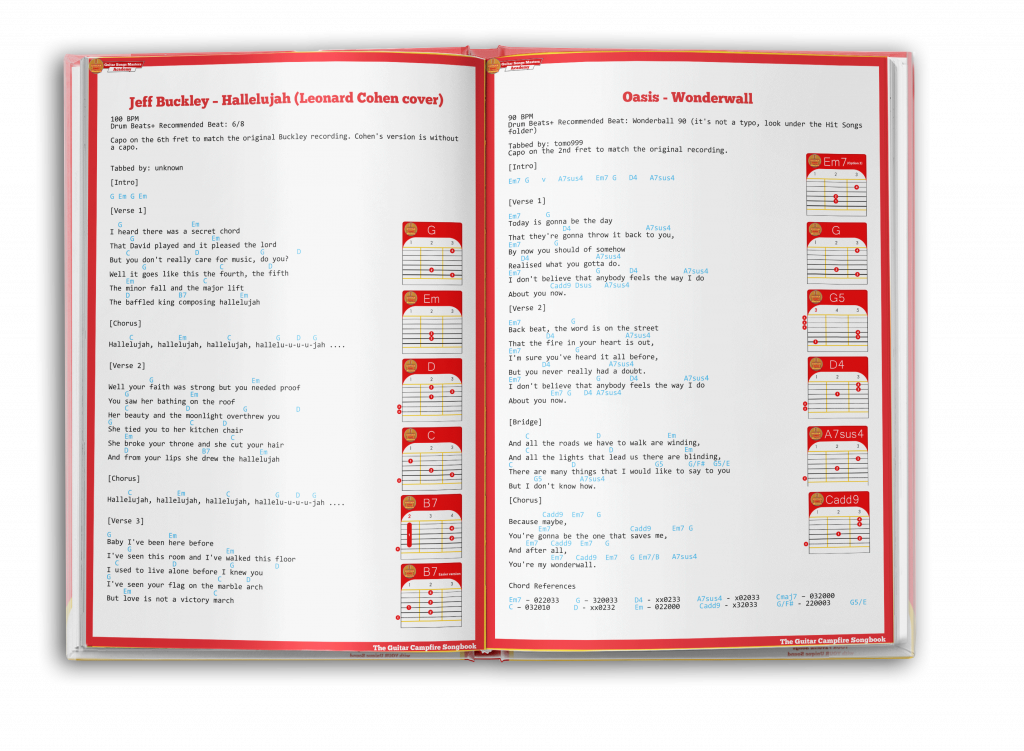