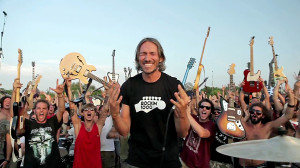 The dreamer and creator of this marvellous project – Fabio Zaffagnini

It does not happen very often that I dedicate a full post on Guitar Songs Masters to one video, but this time it is truly an epic moment that will go down in the books. It is also in the “Funny Shit” category because I just could not get the smile off my face when watching this crazy idea coming to life.

One dude from Italy, Fabio Zaffagnini (why can't I have such an awesome Italian name myself…?), dreamed a dream of getting the Foo Fighters to play in his small town of Cesena in Italy. However, all bands get countless requests like that from a lot of parts in the world, so how will Cesena stand out and actually get the Foo Fighters to come?

Well, how about creating a viral video with a 1000 Italian musicians playing one of their hits in unison?

His plan was to make this dream come true in August of 2015.

Sounds like an awesome idea, but from here into the actual performing of the idea, one year and 40,000 Euros of funding later, the way was very long. You can read more about it in the Rockin'1000 Diary, it's a great story of persistence. Watch the video all the way to the end to listen to the words of Fabio – the dreamer of the idea. Very well said and inspiring.

Dave Grohl (former Nirvana drummer and the lead vocalist and guitarist of Foo Fighters) responded in less than 24 hours, and in Italian!

Share, for your friends who still hadn't had the chance to watch this.

Cheers for many more of those magical musical moments in our lifetime!

Ya know similar cool stories / videos? Please share with us in the comments. THANKS!